Yesterday, I posted video of Israeli-Arab Yoseph Haddad owning Muhammed Desai, the head of BDS South Africa. One of the lies Yoseph debunked was that Israel was not releasing updates to her Arab citizens in Arabic:

The BDS leader in South Africa lied on live Tv. His problem is that i was there to expose it. pic.twitter.com/gd3QJZYury

Following the disastrous (for them) interview, BDS South Africa slightly amended their claim, adding the words “real-time” while accusing Yoseph of lying: 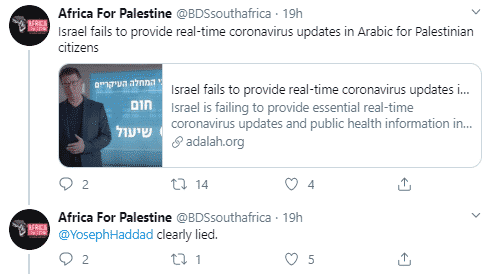 Yoseph responded with a screenshot of an update from the Israeli Ministry of Health site –  in Arabic.

You are so pathetic… You are trying to hide your lie that I revealed so you suddenly changed your version.
I have something that you will never have – facts and truth.
Happy "Apartheid Week"
🇮🇱 pic.twitter.com/sHPwfbfvSu

You can all see it here. For even timelier updates, the Ministry of Health has a Telegram channel (even their Twitter account links to it). I am a member of the channel, which anyone can join, and can confirm the latest updates were sent in both Hebrew and Arabic. The Hebrew version was sent at 2:07

while the Arabic version followed soon after at 3:11

Don’t let the filename of the latter fool you – it is the latest update from today, March 17th.


But if you like, join the channel and see for yourselves.

The Israel haters have once again been caught lying. It’s all they have.

Update: The Arabic preceded the English version, which was sent at 4:04