Infamous Antisemites Among List of Signatories on Boycott Letter

A group of BDS-holes recently urged people to boycott International Diamond Week, which was to take place last week in Israel.

Palestinian civil society organisations, groups and individuals working for justice and peace in the Middle East call upon people in the diamond industry not to attend the International Diamond Week in Israel February 10th-12th 2020.

The diamond industry has been described as a “cornerstone” of the Israeli economy. According to the Jerusalem Post “Israel turns over about $28 billion in diamonds a year. The value of exported diamonds is so significant (about a fifth of total industrial exports) that the government reports its figures sans diamonds to ensure the gems do not skew the values.”

In November 2019, at the conclusion of a three year period of reform, the Kimberley Process Certification Scheme failed to broaden the definition of a “conflict diamond” which is restricted to rough diamonds that fund rebel violence. As a result, diamonds that are a significant source of funding for government forces guilty of grave human rights violations continue to flood the market labeled conflict free.

In 2015 Israel blocked a previous attempt to broaden the definition of a “conflict diamond” as “it could be disastrous…especially to Israel.”

Diamonds processed in Israel may be Kimberley Process compliant but they are not conflict free. Jewellers and consumers should avoid diamonds from Israel until such time as Israel respects Palestinians inalienable rights and international law.

Everyone in the diamond industry has a responsibility to ensure diamonds that fund war crimes or crimes against humanity are not allowed enter the legitimate market.

According to the UN Guiding Principles on Business and Human Rights the responsibility to respect human rights requires that business enterprises “Seek to prevent or mitigate adverse human rights impacts that are directly linked to their operations, products or services by their business relationships, even if they have not contributed to those impacts.”

Given the aforementioned and Israel’s belligerence in the face of all attempts to bring about an end to the occupation and subjugation of Palestinians we believe it is necessary to exert economic pressure to persuade Israel to abide by the norms accepted by civilized nations worldwide.

Palestine Action for the Planet

Aelaf Society for Charity and Development

Boycott from Within (Israeli citizens for BDS)

Center for the Empowerment of Women, Palestine

Coalition for Justice and Peace in Palestine Sydney

Note the list of signatories. They include demonstrable antisemites.

If Americans Knew (IAK), a non-profit founded by activist Alison Weir, has the rare distinction of being condemned for furthering anti-Semitism by the Anti-Defamation League, Jewish Voice for Peace, and the U.S. Campaign to End the Occupation.

•  Weir published an original blog post on her personal site which justified anti-Semitism by labeling the Jewish “race” as “an object of hatred to all the peoples among whom it has established itself,” In the words of the U.S. Campaign to End the Occupation, the piece “effectively blam[ed] Jews for anti-Semitism.”

•  Weir has not only promoted the conspiracy theory that Israel harvests the organs of Palestinians—an update of the medieval blood libel—but has actually asserted the accuracy of the original blood libel itself, which accused Jews of ritually murdering Christian children to use their blood in Passover matzo. (Weir cited the discredited and since withdrawn research of a Jewish writer.)

•  Weir has worked repeatedly with white supremacists, while never challenging their bigoted claims. For instance, in a series of appearances on the radio show of white supremacist and Holocaust denier Clayton Douglas, Weir dismissed allegations that he was a racist, did not challenge his repeated assertions of Jewish control of the world, and did not protest when he played a speech by former Ku Klux Klan grand wizard David Duke. Writes the U.S. Campaign to End the Occupation, “Weir made little to no effort to challenge, confront, or rebut any of these views; on the contrary, she continued to appear on the show.”

•  Weir has also published repeatedly at the American Free Press, a white supremacist anti-Semitic site that is designated as a hate outlet by the Southern Poverty Law Center.

For these actions and others, both Jewish Voice for Peace and the U.S. Campaign to End the Occupation severed ties with Weir in July 2015. (Though the same cannot be said for many other anti-Israel activists, who continue to defend and even honor Weir.)

Look at the Jewish control of this country. You already have three open Jewish members of the Supreme Court. Thirty-three percent. They’re only two percent of the population. You can count on those Jews to do whatever the Jewish agenda is, whatever the Jewish establishment wants…

And now Obama, who is totally under the power of the Jewish control, he’s been, in fact there’s a reason why the Chicago Tribune calls him the first Jewish president. And why the New Yorker magazine had him as the first Jewish president, alright? He’s appointed a Jewish supremacist to be the guy on the Supreme Court, which basically gives Jews total veto over the Supreme Court.

At the same time, If Americans Knew was echoing this anti-Semitic attack on Garland’s nomination on its Facebook page: 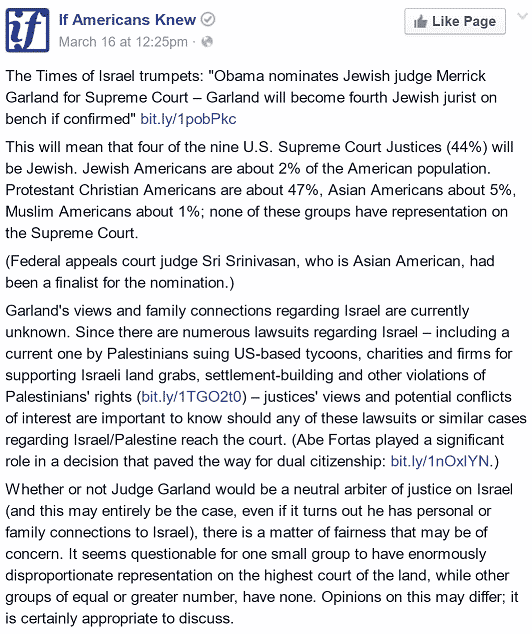 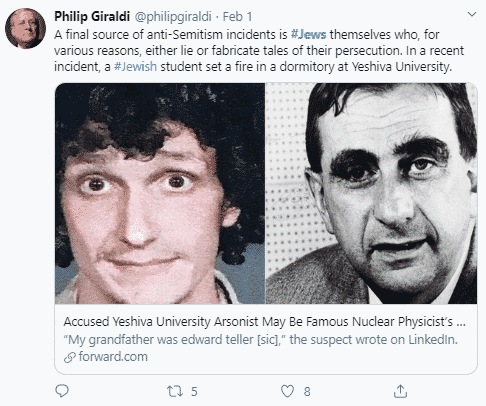 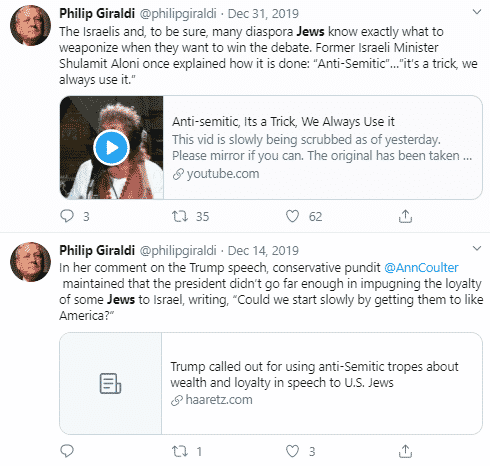 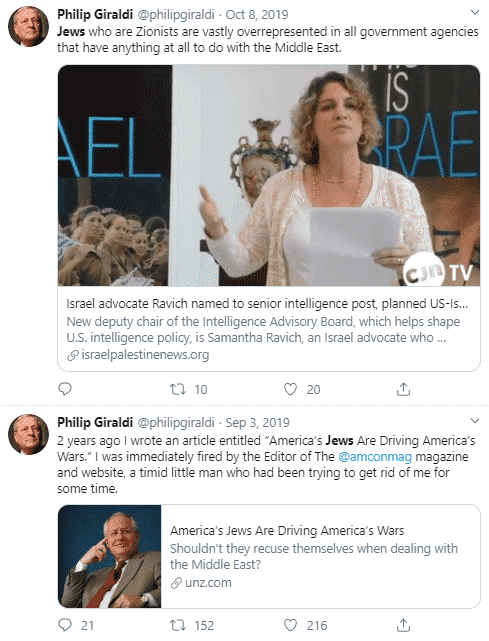 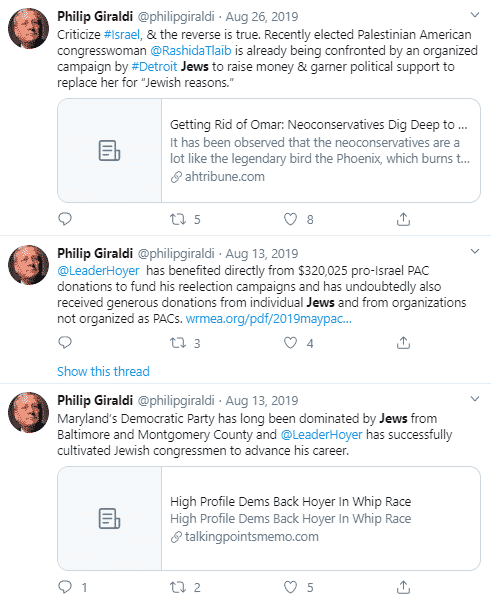 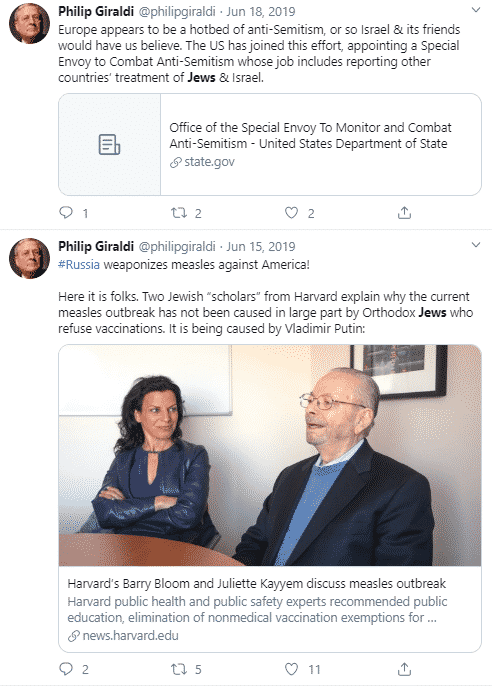 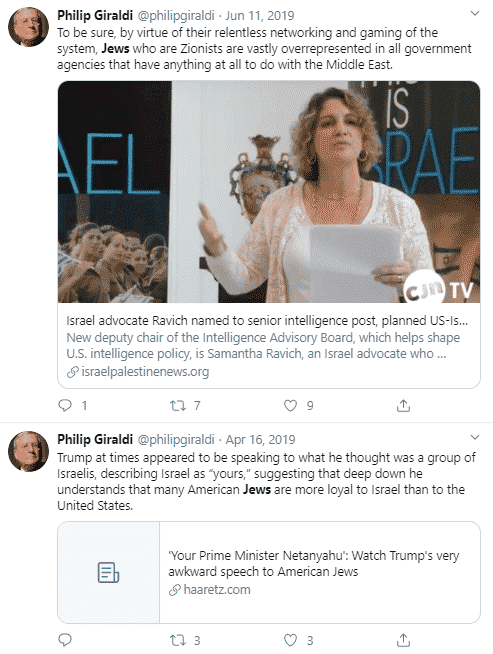 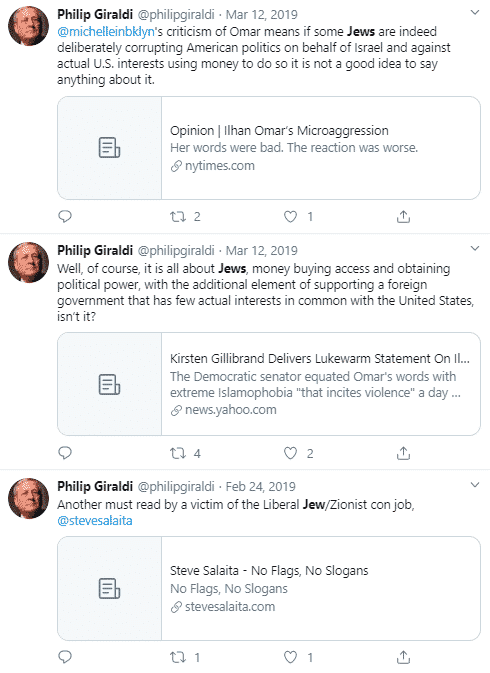 The former vice-chair of Momentum Jackie Walker has been expelled from the Labour party for misconduct, in one of the longest-running high-profile cases of the party’s antisemitism crisis.

It is understood the party disciplinary process took into account a pattern of behaviour by Walker over time, including comments on social media. She was expelled for “prejudicial and grossly detrimental behaviour against the party”.

Walker was suspended more than two years ago after comments made at an antisemitism training session, where she criticised Holocaust Memorial Day for only commemorating Jewish victims.

After participants said the event does in fact commemorate other genocides, Walker said that was not how she viewed it. “In practice, it’s not actually circulated and advertised as such,” she said. “I was looking for information and I still haven’t heard a definition of antisemitism that I can work with.”

Walker was previously suspended and then readmitted to the Labour party after posting during a Facebook discussion that Jews were “chief financiers of the sugar and slave trade” and arguing that “the Jewish Holocaust does not allow Zionists to do what they want”.

Another, Jake Lynch, once held money in the face of a Jewish student (but was cleared by his university of antisemitism over the incident).

These are the signatories who stood out to me, but I am sure if I investigated more of the names, I would uncover more antisemitism. And of course support for terrorism.