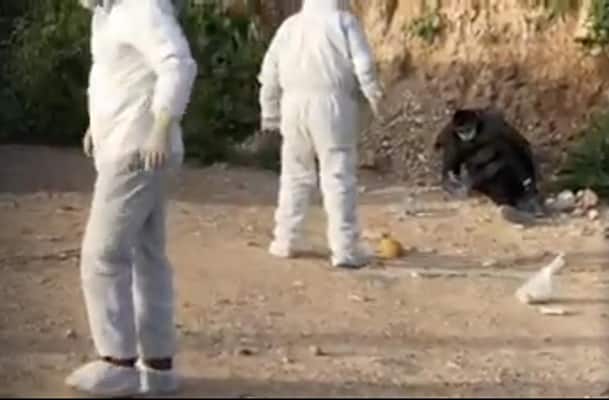 It was like a scene straight out of a horror film.

That’s how 25-year-old Ibrahim Abu Safiya described the moment he saw someone lying on the ground near an Isreali checkpoint on the outskirts of Beit Sira village, west of Ramallah.

“We approached the man lying on the ground, and he looked terribly ill,” Abu Safiya told Middle East Eye.

“He had an extremely high fever. He could barely move his body and he was struggling to breathe,” Abu Safiya said.

The man lying on the ground was a Palestinian labourer who works in Israel. He told Abu Safiya that he had been showing signs of the coronavirus over the past four days, and was recently tested for the virus.

But before the man, allegedly a resident of Nablus, could receive his test results, his Israeli employer reportedly called the Israeli authorities, who picked him up and dropped him on the other side of the Beit Sira checkpoint, which connects central Israel and the occupied West Bank.

“He told us that they just threw him here on the ground and left him,” Abu Safiya recounted.

“How could they do this to someone?” he asked. “It shouldn’t matter if he’s Palestinian, Israeli, or whatever. He’s a human being!”

When Abu Safiya and his friend came upon the man, whose identity remains unknown, they began filming a video which has now gone viral on Palestinian social media.

Abu Safiya said he feared they were witnessing a repeat of events from just one day before.

He alleges that over the weekend, another Palestinian labourer, who suspected he himself had contracted the virus, travelled alone to the Beit Sira checkpoint in order to cross back into the West Bank.

When the man got there, he informed locals of his condition, upon which they called the Palestinian emergency services who were supposed to send an ambulance to pick him up.

Just days earlier, Israel had approved the entry of thousands of Palestinian labourers into the country, under the condition that they had to stay in Israel for at least a month to prevent the spread of the virus in the West Bank.

As part of the agreement with the PA, upon their return, to be coordinated with Israeli authorities, any workers would be immediately put into a 14-day quarantine.

“But the fact that two workers have come, or been dumped here at the nearest checkpoint, with no notice, and clearly no coordination, is very worrying,” Abu Safiya said.

While the PA spokesman Ibrahim Melhem announced that the ill worker was “handed” to Palestinian officials at the checkpoint on Monday, Abu Safiya said that was absolutely not the case.

“Neither the man today or yesterday were dropped off [by Israeli forces] to a [Palestinian] ambulance,” he said, adding that in both cases, Palestinian medics took almost three hours to arrive from Ramallah to Beit Sira.

“The Palestinian government needs to properly coordinate with the Israeli side to prevent this from happening again,” he said. “They can’t just keep dropping people off here without any help.”

Despite his shock at seeing a sick man being “left to die” at a checkpoint, Abu Safiya said he wasn’t surprised by the incident.

“This is the true face of the Israeli occupation,” he told MEE. “They kill us on a daily basis, so this isn’t any different for them.”

The video filmed by Abu Safiya and his friend went viral on Palestinian social media on Monday, as people expressed their outrage over the treatment of the worker.

Abu Safiya says the reasons it’s struck a chord with so many people is because “it is evident of the larger problem of how Israel treats Palestinian labourers and [how] little they value our lives,” he said.

“The Israeli government gave them permission to go to work, knowing the risks,” he said. And for that reason, the government should also provide the workers with the proper protection.

Abu Safiya said he understood why so many workers chose to risk their health and safety to go work in Israel in the middle of the pandemic.

“They had to make the impossible choice of staying healthy, or letting their families starve,” he said. “So many people chose to work so they can provide for their families. And we can’t blame them for that.”

“But Israel also wants them to work, so they should take care of them. If they can’t treat them in Israel, at least don’t throw them to die like animals,” he said, the frustration evident in his voice.

“It’s like we are slaves to them,” he continued. “They use us when they need us, and when they are finished, they throw us away like trash.”

Naturally, when I hear of incidents like this, I automatically suspect a lie. That is based on my past experience with palestinian and anti-Israel propaganda, which is rarely factual.

While the PA spokesman Ibrahim Melhem announced that the ill worker was “handed” to Palestinian officials at the checkpoint on Monday, Abu Safiya said that was absolutely not the case.

A PA spokesman admits Israel handed over the man. This is also reported by other palestinian news outlets like WAFA and Al Quds.

And think further about it: The Middle East Eye story does not make sense: on one hand, they report we went to all the effort to approve the entry of thousands of Palestinian labourers into the country “under the condition that they had to stay in Israel for at least a month to prevent the spread of the virus in the West Bank.” In other words, Israel would rather palestinian labourers stay in Israel than spread the virus in the palestinian-controlled territories. Yet we are supposed to believe we would then just dump a potential coronavirus sufferer alone like that, like “trash”?

The only trash here are those lying yet again to demonize Israel, which is trying to help to prevent the spread of coronavirus, not just in Israel, but also the palestinian-controlled areas.

Update: Ha’aretz somewhat parrots the libel, not mentioning what the PA official said. Yet they do reveal he was in Israel illegally, and was also treated here.