Home Aussie Dave Latest Libel: “Settlers” Attempted to Kidnap and Stab Man Because He Was... 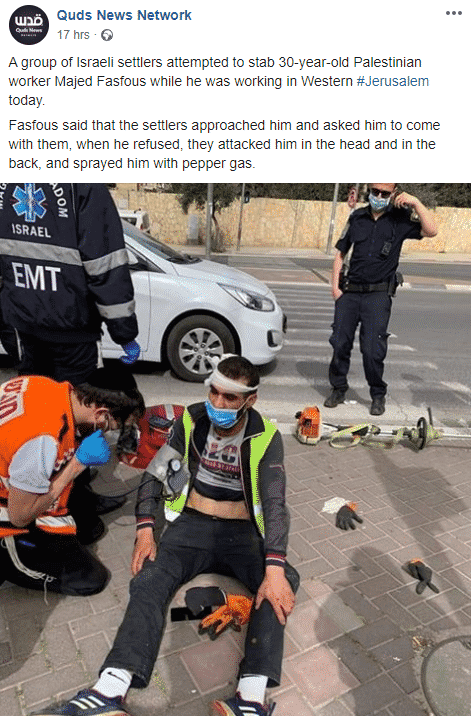 But is this what happened?

Unfortunately, it seems he was attacked by Jews. As for the attempted kidnapping story, absolutely not.

One of the workers was injured in his head and required stitches for a knife wound, Hebrew media reported.

Israel Police said they arrested a man on suspicion of being involved in the incident, which happened on Eretz Hefetz Street in the north-central neighborhood, and detained two others for questioning.

“From an initial investigation it appears that three suspects allegedly attacked three municipal workers and one of them was injured in the upper body and required medical treatment,” police said in a statement. “An investigation was opened.”

The three municipal workers were all Palestinian residents of the Shuafat refugee camp in East Jerusalem, reports said.

Jerusalem Mayor Moshe Lion said in a statement, “I condemn all violent behavior of any kind, against any community, and certainly against Jerusalem municipality workers who are faithfully doing their work on behalf of the city and its residents.”

He called on police “to act with zero restraint against any manifestations of violence.”

While this attack was disgusting and is to be condemned (as it was by the Jerusalem Mayor and others), it was not an attempted kidnapping nor nationalistic attack. Some extremist in the ultra-Orthodox community have been lashing out against those trying to enforce measures to help prevent the spread of the coronavirus. For instance:

A vehicle carrying medics and municipal inspectors was pelted with rocks and other objects Saturday in Jerusalem’s Mea Shearim neighborhood while traveling to conduct a coronavirus test.

A volunteer paramedic received a head injury in the attack and required hospitalization, according to the Magen David Adom ambulance service.

The rear window of the Jerusalem municipality vehicle, which was being used by Magen David Adom to collect a sample from a man suspected of having the virus, was smashed by the stones and part of the windshield was shattered.

According to Channel 12 news, the attack was carried out by members of the so-called Jerusalem Faction, a hardline group that has been linked to numerous violations of emergency ordinances meant to curb the spread of the coronavirus.

Earlier Saturday, police arrested 10 people in Mea Shearim accused of assaulting officers and interfering with their efforts to enforce restrictions.

The neighborhood is home to numerous extremist ultra-Orthodox groups and has been the scene of multiple clashes between residents and police enforcing Health Ministry directives against the virus. A Magen David Adom team was also attacked with rocks on Monday while performing a coronavirus test in Mea Shearim.

These palestinian workers happened to be on the receiving end of this despicable behavior because they were in the wrong place at the wrong time.

Note also how they were employed by the Jerusalem municipality, something the haters would not like to admit.

As is the fact you can see in the photo how the ultra-Orthodox Magen David Admon medic is treating the injured palestinian man.