The Intercept Whines that FBI Once Opened Terrorism Investigations into ISM. Here’s the Proof it was Justified

The Intercept is upset the FBI once opened terrorism investigations into “nonviolent Palestinian solidarity group” the International Solidarity Movement (ISM).

Instead, the FBI was conducting an international terrorism investigation into Chmiel and another activist from the delegation (The Intercept reached out to the second activist, who asked that their name be withheld).

Neither Chmiel nor the general public ever learned of the official terrorism investigation until now. Its existence was revealed by hundreds of pages of FBI files about the International Solidarity Movement obtained by The Intercept through a public records request. The documents make references to other investigations from FBI field offices around the country involving ISM or its members, but many of the files are so heavily redacted that it is impossible to tell what they refer to. In at least some instances, the FBI appears to be monitoring the political activity of ISM members or at the very least noting ISM affiliation of subjects of FBI monitoring.

It is clear, however, that the FBI conducted at least two major investigations into ISM. In addition to the international terrorism investigation into the two St. Louis activists, the FBI’s Los Angeles Field Office initiated a domestic security investigation into ISM as an organization.

ISM turned out to be exactly what it said it was — entirely nonviolent — yet the FBI still justified its probes through paranoid views of political associations. It wasn’t just that the federal government was monitoring political speech, the FBI treated certain forms of speech as evidence of terrorism. Supposed opinions of ISM members on political economy make them likely to become terrorists. It is taken for granted that associating with anarchists is akin to associating with terrorists.

Actually there is much evidence of the ISM actively supporting terrorism and collaborating with terrorists. Here is just a sample

Before joining ISM group in Hebron I had my training in Ramallah during two days. How to obstruct IDF ops? How to freely walk in a neighbourhood and alert the coordinators the movements of incoming IDF patrols? When to go out and show your presence to the military, so that they dont dare shoot at your direction? Shield a house that IDF want to demolish? Shield stone-molotov-throwing militants? Yes. Our job. PLO (now Fatah, but it is the same) uses well meaning idealistic western youngsters to aid, shield and make-possible their terrorist agenda. The Fatah-coordinators made it clear to us that ISM uses only non-violent means of resistence, but in the meantime stressed that if the Palestinians chooses to use violence our job is to shield them. It is the Palestinians that live under occupation and humiliation, not us western activists, so we should let them make the operational decisions and we internationals are there to act like human shields and protect them from the IDF. 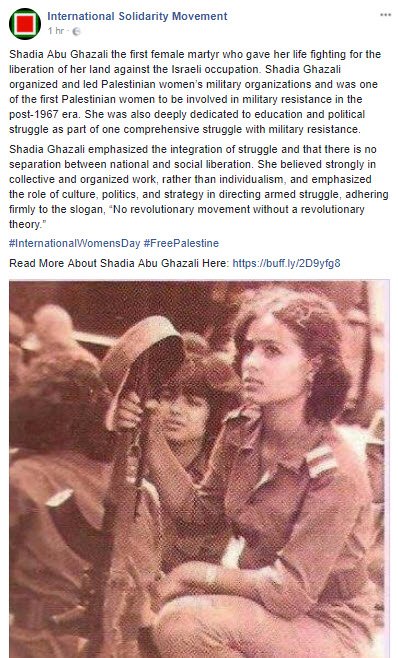 So Intercept, cry me a river.