Raving lunatic and Jew-hater Ariyana Love has gone on yet another Facebook video rant against the Jooooooos. Even by antisemitic standards, it is nutty and horrific – containing almost every antisemitic trope in the book and blaming us for the coronavirus, among other things.

I have distilled the main part (but there is more here for those who can stomach to hear more of this evil nutcase).

Note how she speaks of True Torah Jews, as if to show she is not really antisemitic (as she explicitly claims in her rant). Yet in her delusions, the true Jews only believe in the Torah, and not the Talmud. Memo to antisemite Ariyana: The Talmud is a compilation of the Oral Torah, and even these anti-Zionist “True Torah Jews” believe in it.

And if this venemous, antisemitic rant was not enough, she ‘likes’ a comment from a fan expressing a desire that we be exterminated. 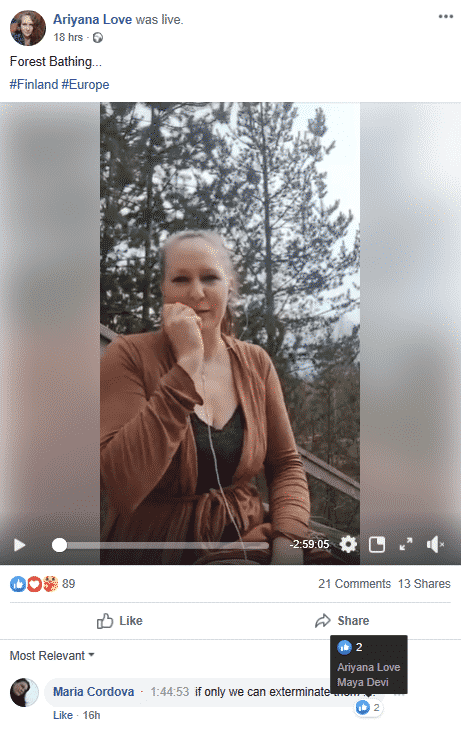 This is incitement to murder, plain and simple.

The comment relates to a timestamp of the video corresponding to the rant against Jews, so there is no question as to who she agrees should be exterminated.

Love’s hate speech seems to fall under “ethnic agitation” under Finnish law. Please join me in reporting her to the police  – especially if you actually live in Finland (instead of having Facebook remove the video – let’s have the police investigate and prosecute her first).

You can report an offence to the police in the following ways:

submit an electronic report online (requires identification for example with online banking codes)
https://asiointi.poliisi.fi/asioiverkossa/rikos?lang=en
print out the report form and send it to the police https://www.poliisi.fi/crimes/printable_forms_for_reporting_an_offence
visit the police station in person
report the offence by phone. You will find the contact details of the nearest police station at:
https://www.poliisi.fi/contact_information
In urgent cases, call the emergency number 112.

And let’s bring her also to the attention of the Finnish media.