Home Aussie Dave The Week Continues to Serve Up Some Tasty Karma to Antisemitic Foodbenders...

Foodbenders owner Kimberly Hawkins’ week continues to kick her in the tuchus.

Canadian PM Justin Trudeau has called her out on her antisemitism

There is no place in our country for hate or antisemitism, and we must be on constant guard against this behaviour. Whether they occur here at home or around the world, Canada will always stand against these unacceptable acts and stand with the Jewish community. https://t.co/p6aKdlKJT5

She is being taken to the Ontario Human Rights Tribunal

A human rights complaint has been filed against Foodbenders claiming owner Kimberly Hawkins discriminated against all Jews when she publicly stated her refusal to serve Zionists in her store.

The claim relies on the International Holocaust Remembrance Alliance’s (IHRA) working definition of anti-Semitism — adopted by 18 countries including Canada — that depicts anti-Semitism as often expressed in coded language, targeting “Zios,” “Rothschilds” or the State of Israel, says Russell Shalev of the Tel-Aviv-based International Legal Forum, a non-profit fighting against terror, the delegitimization of Israel and anti-Semitism.

Shalev said this is likely the first time IHRA has been used in a human rights complaint in Canada and possibly worldwide.

Aschkenasi’s complaint says that Foodbenders not only publicly stated it would not serve Jews but continued to harass Jewish customers with a series of anti-Semitic social media posts. Prior to June, the store also made a series of assertions of Jewish conspiracies on Facebook.

She says her parents escaped Nazi Germany in the 1930s after they saw the rise in anti-Semitic hatred, anti-Jewish conspiracy theories and legal restrictions against Jews.

“The atmosphere of anti-Semitic incitement that Foodbenders has created both online and around their store has brought back traumatic memories and fears,” Aschkenasi says in her complaint.

A protest in support was a complete bust

as is the GoFundMe set up in support 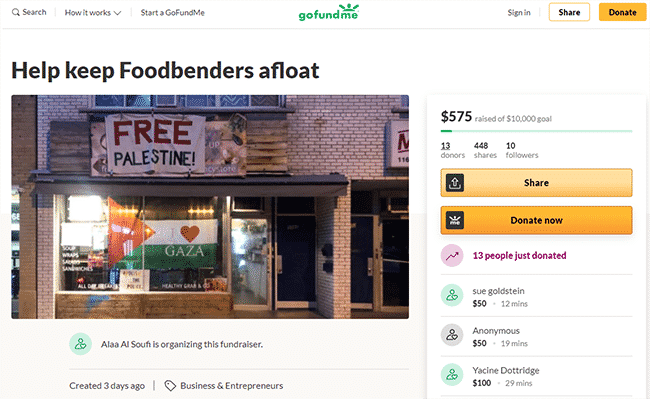 Some people are ambivalent about exposing Jew haters. This is exactly why I do it – it can get results.