Unhinged Jew-hater Ariyana Love sure loves to spin a good yarn. Weeks after claiming I am a “key IT player in defending the Israeli state” who “likes to infiltrate Anonymous from sock puppet accounts,” she has now decided my site is backed by the IDF. 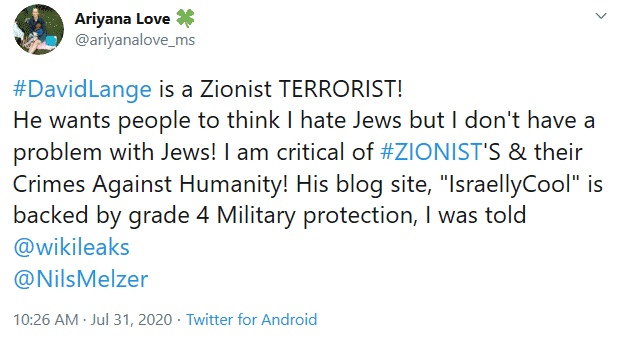 I am feeling better already.

By the way, I just Googled “grade 4 military protection” and all I got were these lousy search results. 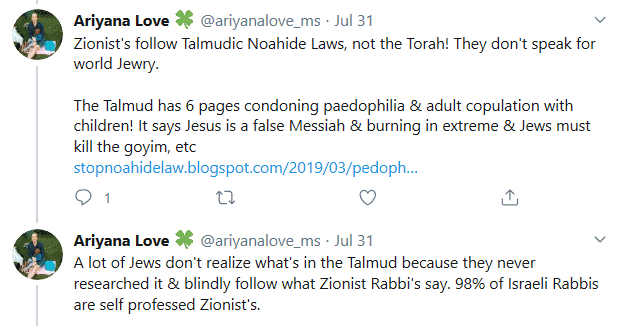 Memo to Jew haters like Ariyana Love: The Talmud is part of the Torah. Ask your so-called allies, anti-Zionist groups like Torah Jews, if you don’t believe me.

Needless to say, your claims about it come from antisemitic websites that do not understand Aramaic. The quotations are either false or taken out of context.

Here are those “Noahide laws” by the way:

Do not profane G‑d’s Oneness in any way.
Acknowledge that there is a single G‑d who cares about what we are doing and desires that we take care of His world.

Do not eat a limb of a living animal.
Respect the life of all G‑d’s creatures. As intelligent beings, we have a duty not to cause undue pain to other creatures.

Do not steal.
Whatever benefits you receive in this world, make sure that none of them are at the unfair expense of someone else.

Harness and channel the human libido.
Incest, adultery, rape and homosexual relations are forbidden.
The family unit is the foundation of human society. Sexuality is the fountain of life and so nothing is more holy than the sexual act. So, too, when abused, nothing can be more debasing and destructive to the human being.

Establish courts of law and ensure justice in our world.
With every small act of justice, we are restoring harmony to our world, synchronizing it with a supernal order. That is why we must keep the laws established by our government for the country’s stability and harmony.