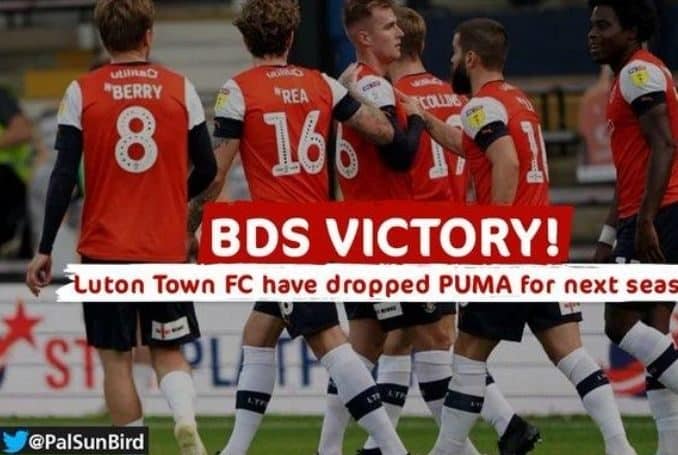 Activists in the UK are celebrating a victory for Palestinian rights, after Luton Town Football Club dropped German sportswear brand Puma as its supplier.

“We would like to thank Luton Town FC for their constructive responses to our calls to boycott Puma, and for notifying us directly of their decision to drop the company as their kit supplier,” said Markus Keaney, spokesperson for Luton Palestine Solidarity Campaign.

“We hope other clubs will follow suit and choose to stand with justice, freedom and equality.”

More than 200 Palestinian sports teams and athletes have called for a boycott of Puma because it sponsors the Israel Football Association, which includes teams in Israeli settlements built in the occupied West Bank in violation of international law.

The Electronic Intifada has seen correspondence involving Luton FC officials, confirming that the team raised these human rights concerns with Puma before deciding to go with another supplier.

The BDS Movement reposted this, and more scum and villainy joined the gloating chorus.

Except for one problem: it was not true (surprise surprise). Luton FC, faced with this fake news spreading, issued the following statement.

Last week we announced a new kit partnership with Umbro, along with three new kits for the 2020-21 season.

We are delighted to be partnering with a new supplier who shares many of our own brand values especially with regards to sustainability and ecological issues among other values.

Our new partnership with Umbro begins after four seasons with outgoing supplier Puma, who had provided us with first-class first-team and replica kit since the 2016-17 season.

We are aware that there have been a number of statements in the public domain from organisations claiming that our decision to change kit supplier is a success for their own causes.

We would like to make it a matter of public record that Luton Town FC is an organisation that does not make commercial decisions based upon politics or religious matters, and that our decisions to switch kit supplier was made solely on our own criteria in the current sporting marketplace.

No retractions yet…or ever. Because lying is their modus operandi.