A note from Roger to בני גנץ – Benny Gantz:
Yes, the same Benny Gantz that we are suing in the Dutch courts for his complicity in the criminal mass murder of six members of the Ziada family in Gaza in 2014 during Operation Protective edge. It’s going to be hard to atone Benny, at least make a start by reading this letter.
And please be sure to send the below letter to:
Israeli Defense Minister, Mr. Benny Gantz
bgantz@knesset.gov.il
CC: Israel’s Attorney General
anerh@justice.gov.il
Dear Mr. Gantz,
This is an urgent appeal asking you to immediately intervene in order to save the life of administrative detainee Maher al-Akhras (49) from Jenin, a father of six, who has been on hunger strike for 77 days now. His health condition is deteriorating by the moment and he is in imminent mortal danger.
Al-Akhras protests against the unlawful and anti-democratic procedure of administrative detention, which is used by Israel frequently. Administrative detainees are imprisoned without any kind of indictment, they don’t know what they are accused of and cannot respond and defend themselves. Their arrest may be prolonged indefinitely.
The military prosecution declared that Akhras’ detention would not be prolonged when the present term is finished, in November. Yet they refuse to release this dying man several weeks before this date, despite his terrible health condition. Needless to day, al-Akhras cannot be classified as a “security threat” at the moment! The military obstinacy is cruel, inhuman and cannot be justified in any way.
Mr. Gantz: as Minister the Defense you have the power to save al-Akhras. You can do this in one simple order.
Please use your power and do so. Give an order to release Maher al-Akhras immediately.
Roger Waters, a voice in the choir.

As I posted a few days ago, al-Akhras is an Islamic Jihad terrorist. And I wouldn’t be surprised if Waters is fully aware of this fact. Forget that many of us have left proof of it on his Facebook page; it is not like the palestinians are even hiding it.

Saraya al-Quds militant warns that #Israel bears full responsibility for the life of a PIJ member (Maher al-Akhras) held in administrative detention and on a hunger strike. The militants says the group awaits orders to declare war if something 'bad' happens to the prisoner. #Gaza pic.twitter.com/bAU8v7q6OQ 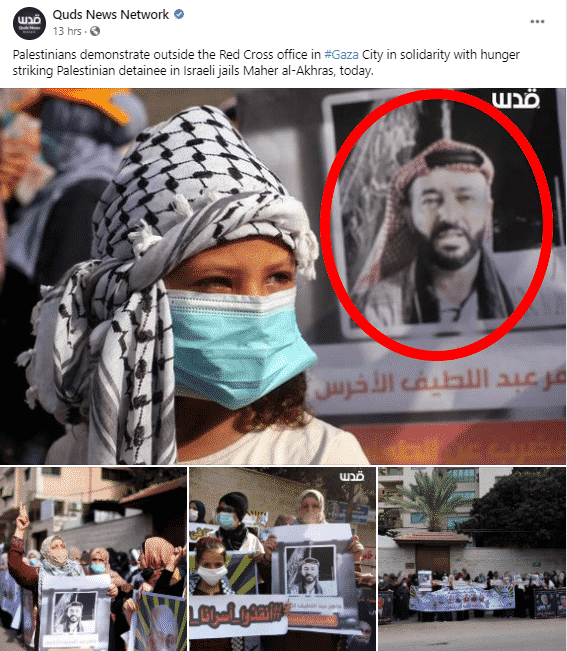 Perhaps there is even a clue in his letter

Needless to day, al-Akhras cannot be classified as a “security threat” at the moment!

which seems to imply Waters is aware as to why al-Akhras was detained.

Meanwhile, did Waters pen a letter to Hamas to release Israeli teenagers Naftali Frenkel, Gilad Shaer, and Eyal Yifrah, who were later found to be murdered?