Israel Hayom reports on a new poll published in the UAE showing growing support for establishing ties with Israel in some Arab countries.

The poll, conducted by US-based Zogby Analytics, has found that in four out of five Arab states and entities there is majority support for normalization with Israel and that the driving force behind this shift is a desire to stabilize the political and military situation in the Middle East.

According to Sky News Arabia, the poll included 3,600 Arab respondents living in Saudi Arabia, the UAE, Jordan, Egypt, and the Palestinian Authority, and was supervised by James Zogby, founder and president of the Arab-American Institute.

Sky News Arabia was the only media outlet reporting on the results of the survey.

According to the survey, 42% of Egyptians, along with 41% of Jordanians, 56% of the residents of the UAE, and 41% of Saudis support the normalization agreements between Israel and the Arab world, citing primarily regional stability and economic prosperity.

Someone not happy with the poll results is anti-Israel DouchebloggerTM Richard Silverstein, who posted this 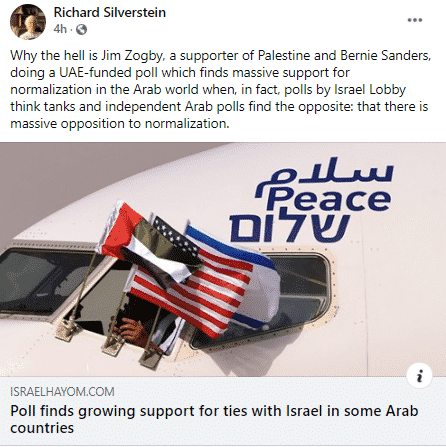 How dare he run a poll that ends with results I do not like!

Note how Silverstein also tries to use the results of “polls by Israel Lobby think tanks” to prove “massive opposition to normalization.” He constantly belittles any pro-Israel publications as untrustworthy, yet now they are to be believed?

If this isn’t proof Silverstein is just a lying fool, I don’t know what is.