As I mentioned in this post, Israel-hater Marc Lamont Hill criticized Mayor of NYC candidate Andrew Yang, for a piece the latter wrote in which he correctly stated that

Not only is BDS rooted in antisemitic thought and history, hearkening back to fascist boycotts of Jewish businesses, it’s also a direct shot at New York City’s economy

This has triggered a lot of discussion, and much pushback against Hill, who has been called a liar – something he really does not like. 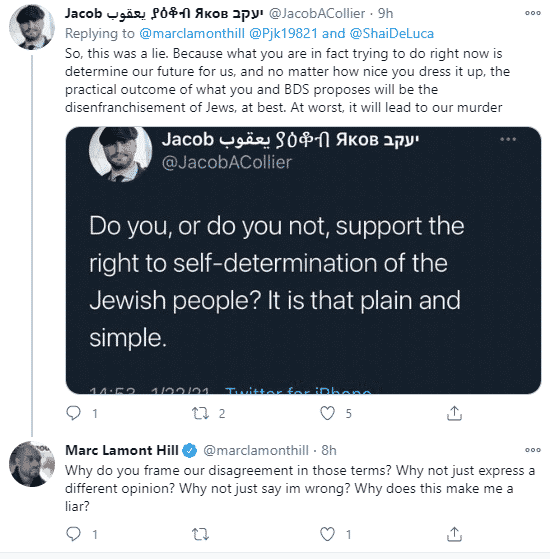 He also claims this is what he believes:

You believe in a shared land, Marc? So how come you delivered a lecture at a conference run by AMP – an antisemitic, terror-supporting organization – in which you stated that Zionism (the movement to re-establish a Jewish homeland in the Land of Israel) is not legitimate? Zionism is not incongruous with sharing the land – we share the land with our Arab brothers and sisters who choose to live with us in peace.

You believe in no one being harmed, Marc? How come you consistently glorify palestinian terrorism?

You see palestinian terrorism as legitimate resistance, after all.

You’ve even given violent palestinian Arab terrorists a platform.

And the catchphrase you used “From the River to the Sea” – which you claimed was peaceful – is anything but.

Bonus: This rally was co-organized by AMP, the same organization that organized the conference at which you spoke.

So yes, I do believe you are lying.

And it isn’t the first time.

In other words, Marc, when I call you a liar, I am not engaging in schoolyard insults. I actually have the receipts.

So either renounce pretty much everything you have been saying and doing until now, or wear the badge of liar proudly.