Some Israeli Humanitarian Work Through the Eyes of a Kenyan Woman

A Kenyan woman has made some waves on social media, speaking about the desert farming skills she learned in Israel, which she is now putting to good use back in Kenya. 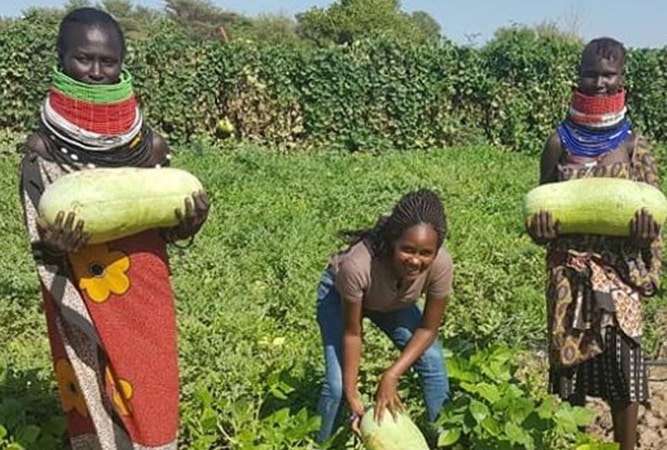 Yet, six years ago, had someone suggested that she would be excellent at farming she would have laughed it off.

In 2017, Ngina was accepted into a study programme – meant for agricultural students – at the Arava International Centre for Agricultural Training (AICAT) in Israel.

For 11 months she studied how to grow crops like onions, pumpkins, pomelos, watermelons and a few more – under dry conditions.

Ngina came back home, from Israel, in June 2019. She took a two-week rest then took off to Turkana.

“In Turkana I was joining an Israeli NGO, linked to AICAT, that aims to help Turkana people overcome food insecurity,” she says.

Ngina is 25. She is short and slender in stature but well-endowed in the brain. She is a volunteer with Furrows in the Desert – the NGO.

Her work involves training Turkana residents on how to excel in farming food crops in spite of the harsh climate.

“I grew up watching news of hunger in Turkana. You mention Turkana and the first thing that comes to mind is people dying because they can’t access food.

“Israel taught me that farming is not dependent on the climate. The whole of Israel is a desert – with average daytime temperatures nearing 50°C.

“Everything that grows in Israel is watered and tended to expertly. The country is food sufficient.

“Turkana, compared to Israel, is a much-better place to do farming considering that in some Israel imports soil on which they do farming.

“When I decided to go to Turkana I strongly felt that locals would benefit from what I had learnt about farming while at AICAT,” she says.

Furrows in the Desert, Ngina says, provides free training on crop production to the people of Turkana. Each trainee, upon finishing the course, is gifted with a full irrigation kit.

“The kit comprises a pump, safety gear, drip irrigation pipes and a storage tank,” she says.

Drip irrigation, she says, delivers the exact amount of water needed by the crops. The water is also delivered directly to the plant and thus wastage is greatly minimized.

The Nation also has published an interesting piece on Racheal’s work entitled Woman of passion: I visited Israel and got a passion to save the Turkana through farming.

The haters are going to have a hard time trying to convince people this is somehow “agri-washing” or “humanitarian-washing”, considering this is all coming from Racheal!