If Disney Saw Fit to Fire Gina Carano, Why Not Mark Ruffalo?

Following my post on Gina Carano’s firing by Disney from The Mandalorian, a friend of mine suggested it may have been because as a  representative of the Disney brand, she should know better than to make “offensive” social media posts.

I gave it some thought and realized if this is the case, then why hasn’t The Incredible Hulk Mark Ruffalo been similarly fired?

As a Jew, I am way more offended that he has defended Hamas, an internationally recognized terrorist organization sworn to killing Jews,

falsely painted the world’s only Jewish country as an “apartheid” state, while ignoring palestinian Arab violence,

shown he is more concerned about the rights of palestinian Arabs than Jews in Israel,

turned a blind eye to the antisemitism of Jeremy Corbyn (someone who has opposed the International Holocaust Remembrance Alliance’s working definition of antisemitism), 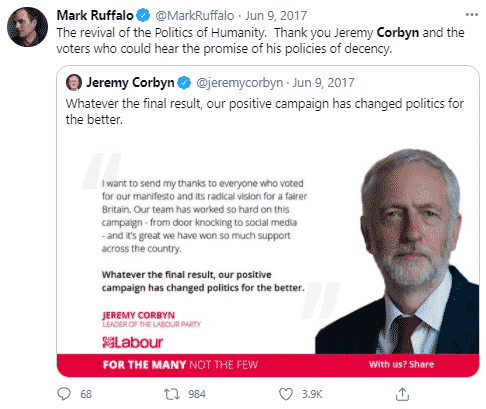 and has even had the chutzpah to suggest he knows more about defining what is and what isn’t antisemitism than Germany, where the Holocaust originated. 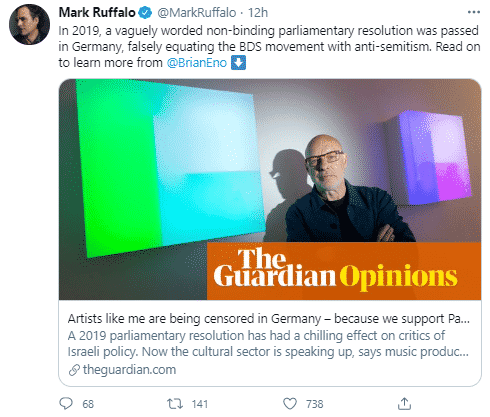 This is all way worse than making an arguably clumsy Holocaust comparison.

But if you want to stick to misguided Holocaust comparisons being the be-all-end-all, why has Gina’s co-star Pedro Pascal, who actually plays the Mandalorian (and has not spoken out against Gina’s axing), gotten away with his own?

Disney+ must immediately fire any actor who has made an overwrought Holocaust comparison pic.twitter.com/kPO81Qf38X

(By the way, I would not support Ruffalo or Pascal being fired on the basis of these tweets).

There is no doubt Disney’s decision is political. The issue is Gina’s politics is bad because it is the wrong kind of politics to them.