Earlier this month, I posted about the attempted +972 hit job on Israel: a story about a palestinian Arab student at Tel Aviv University who was reportedly barred from receiving a vaccine at a campus-wide vaccination drive. As I explained at the time, the student did not receive the vaccination due to what seemed to be a bureaucratic oversight. In fact, not long after, Tel Aviv University ran a vaccination drive for more than 400 international and palestinian Arab students.

Now Business Insider South Africa has covered the story, and it is another hit job. 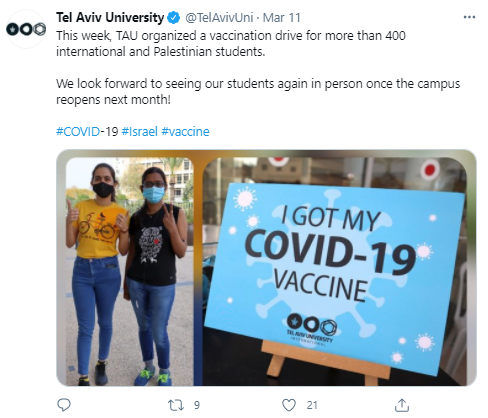 It takes graduate student Nadiah Sabaneh five hours to travel from her home in the Northern West Bank to her university in Tel Aviv. She has to arrange transportation, brace the weather, and pass through three military checkpoints to reach her campus.

But she didn’t mind the rain-drenched journey to Tel Aviv University on February 16. Her trouble, she thought, would all be worth it when she reached the school’s campus-wide vaccination drive and finally received her first Covid-19 shot, she told Insider.

Once she arrived, she took a number and joined the line, patiently waiting for her turn to receive a vaccine for the virus that put her mother in the ICU.

Sabaneh said she checked with university officials before making the trip, confirming she, too, would be eligible for a vaccine as part of the university’s effort to inoculate the entire campus community before returning to in-person instruction in the spring. Though some of her friends and family members had chided her for inquiring, she had been assured her expedition would result in a shot.

When Sabaneh reached the front of the line, she said a volunteer health official asked for her Identity Number – the government identification document granted to all Israeli citizens at birth. The official needed her number, or proof of Israeli insurance, anything really, to log her into the system.

But Sabaneh had no number, nor insurance to give, because despite living in a territory occupied by Israeli military forces, Sabaneh is not Israeli. She is Palestinian. And because she is Palestinian, she said she was turned away and denied a vaccine that day.

Sabaneh said she watched from the side of the room as professors, students, janitors, and employees of diverse backgrounds all received the shot with ease. Despite numerous attempts by university officials to amend the situation, Sabaneh said it became clear no exceptions could be made. She had to return home, unvaccinated; the disappointing culmination of what she said was a “painful experience.”

“I want equity and equality,” Sabaneh said. “I earned this right to be vaccinated just like any student.”

After six hours of waiting, Sabaneh said she finally left. It was getting dark and she had to get home through the checkpoints before they closed.

Though her situation has since been rectified, it is emblematic of Israel’s controversial vaccination efforts thus far; superb success in inoculating its own citizens and a begrudging resistance toward doing the same for Palestinians.

The inequity has prompted a global debate over whether Israel has an obligation as an occupying power to vaccinate Palestinian people.

Sabaneh’s story is par for the course, according to Omar Shakir, Human Rights Watch director for Israel and Palestine.

Public pressure may have played a role in the conclusion to Sabaneh’s story. Whether it was the media coverage of her situation in multiple local outlets or the efforts of dedicated university officials that helped turn the tide, Sabaneh finally got her first shot on March 9.

Mere minutes before a mainstream media outlet covering her story was set to publish, Sabaneh said the Israeli Health Ministry changed its policy regarding Palestinian students at Israeli universities. Sabaneh, as well as her nine fellow Palestinian university students, would be inoculated.

In other words, despite getting educated at an Israeli university, having university officials fight for her, and finally getting a free vaccine (I assume she did not have to pay 20 shekels for a vaccination certification like those vaccinated under PA auspices), Sabaneh sees fit to slander Israel to the international media.

And there is also something else here I want to highlight.

The Palestinian student, who asked to remain anonymous in order to protect her safety, said that upon receiving the email, she inquired with her program whether she was eligible for the vaccination.

Now she is no longer worried about her safety?

I think Sabaneh isn’t being fully truthful. Not that would be a first for a palestinian Arab giving their version of events to the mainstream media.