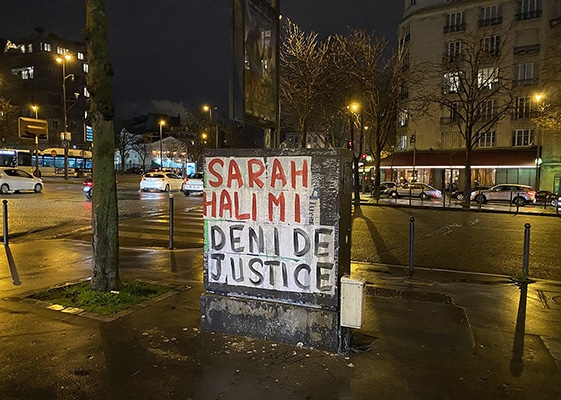 The French Supreme Court of Appeal (Court of Cassation) has ruled that Kobili Traoré, who killed his elderly Jewish neighbour Sarah Halimi on 4th April, 2017, is ineligible to stand trial because he was under the influence of cannabis and therefore not criminally responsible for his actions.  Traoré was sent to a psychiatric hospital for treatment where he has since remained.

Ms Halimi’s family, who are seeking a trial by jury, had been hoping that France’s top court would overturn an earlier decision by French prosecutors not to charge him with murder. After the decision yesterday, they said that they intend to refer the case to the European Court of Human Rights.

Mali-born Traoré, who has previous convictions for violence and drug trafficking, had beaten the 65-year-old physician Ms Halimi for twenty minutes whilst shouting “Allahu Akbar” and “I have killed the shaitan” – devil in Arabic – before throwing her out of her apartment window. He told the judge that he was not motivated by antisemitism and after he saw a Torah and Menorah in the apartment of Ms Halimi he suffered hallucinations which worsened his mental condition. However, Georges Halimi, the victim’s brother said that his sister and her family were often subjected to abuse by the Traorés and that they would spit on the floor if she happened to pass by in the building they shared. Kobili Traoré was known to attend Mosquée Omar, one of the most radical mosques in Paris.

Jews in France have long been victims of far-right extremism but in recent decades a newer form of antisemitism emanating from Islamic fundamentalists has taken root. In 2012, Mohamed Merah shot dead three children and a teacher at a Jewish school in Toulouse. Some years later four French Jews were killed in a siege on a Jewish supermarket in eastern Paris by Islamist fanatics. In this climate of fear, the decision not to prosecute Kobili Traoré for murder has been mired in controversy with accusations of a political cover-up and it highlights the consistent failures of the French state in its approach towards dealing with antisemitism. Francis Kalifat, President of CRIF (an umbrella group of French Jewish organisations) expressed his disappointment:

…the Court of Cassation rejects the possibility of an Islamist anti-Semitic killing occurring in France. Now in our country we can torture and kill Jews with impunity.

In a separate development, on Monday 12th April,  the French Senate approved amended proposals for a new bill aimed at “reinforcing the respect for principles of the Republic and the fight against separatism.”  The bill is part of President Macron’s plan to tackle the rising extremism in France. France is home to an estimated 5.7 million Muslims of mainly North African origins. One amendment requires state approval for foreign funding of religious sites and to oppose private schools financed by states deemed “hostile” to France. Although, the text of the bill doesn’t mention the word “Islam”, Islamic radicals the world over have been up in arms over what they perceive to be Macron’s plans to secularise Islam in France.  For his part, President Macron insists that he is not against Islam, just Islamist extremism and separatism.

The dichotomy here is that France seems determined to curb Islamist extremism yet appears unable to effectively deal with one of its most visible manifestations: antisemitism.