When the mainstream media covers interactions between Jews and Arabs in Hebron, they are always negative. Invariably, these clashes are presented as the fault of a group of belligerent Jews living in a sea of peace-loving Arabs.

But as usual, things are not as simple as they are presented. For instance, some Jews and Muslims in Hebron would like to break other things besides each other’s bones – like the ice. And fasts. 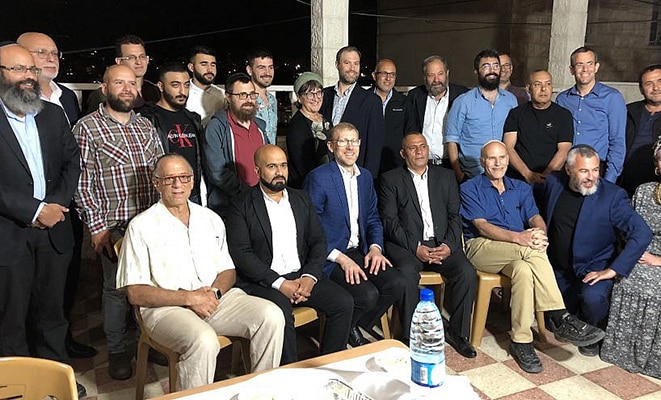 As the sun was setting over the ancient city of Hebron signifying the end of another day of fasting for devout Muslims during the holy month of Ramadan, hungry Palestinians were shuttling their guests from a meeting point in the city to a private and beautiful home to prepare for an Iftar feast, the customary sunset meal Muslims have to break their fast just after the call for evening prayers.

But at this particular gathering, the 75 or so guests weren’t only Muslims. Around half were Israeli Jews, primarily political and community leaders of the “settler” movement, Israelis who live and represent the Jewish communities of Judea and Samaria, more commonly known as West Bank.

The event was held at the home of Ashraf Jabari, a Palestinian businessman who, along with Israeli Avi Zimmerman, founded the Judea and Samaria Chamber of Commerce and Industry in 2017, a nonprofit organization dedicated to promoting economic development between Arabs and Jews in the region.

The chamber organized the event to allow the participants, many of whom are actually neighbors but have limited interactions, as an opportunity to get to know each other in a social setting and also do some networking.

The Jewish guests entered the home and presented their hosts with gift baskets of chocolate and fruits before being shown to their tables, already displayed with strictly kosher food. The Muslims ate at separate tables with food prepared according to their halal traditions; however, it was only a matter of minutes before the diners joined each other’s tables to engage in conversation.

Jabari spoke as well and told his guests “it was an honor that you accepted my invitation and came here. We prefer coexistence with our friends in Israel and those in the settlements. You are our neighbors and our friends, and we hope to continue towards a real peace between us.”

Read the entire thing here. Because you won’t see it in the mainstream media.