Shimon Hatzadik (Sheikh Jarrah) Arabs: Our Lawyers and PA Have Caused Our Predicament

I don’t normally consider the Jewish Press the most reliable of sources, but I am absolutely certain this report regarding what is going on in the Shimon Hatzadik (Sheikh Jarrah) neighborhood of Jerusalem is true: 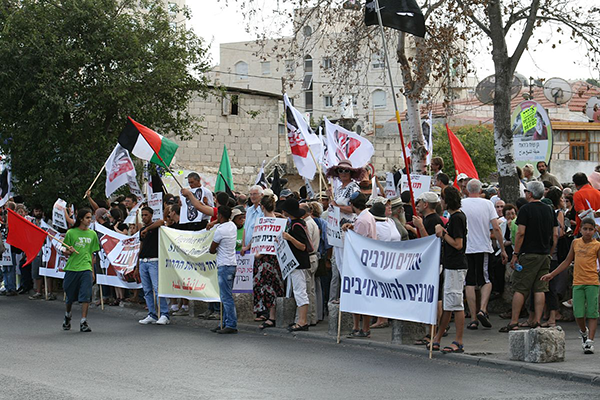 The court granted a five-day extension on Sunday for the settlement of disputes between the illegal Arab residents of the Sheikh Jarrah neighborhood and the Jewish owners.

Residents and public figures in eastern Jerusalem told TPS that the chances of a settlement are nil, as the legal dispute has become nationalist. They feel they are caught between a hammer and an anvil and are about to lose their homes due to conducting a national struggle under the guise of a legal battle.

The pessimism among the Arabs in the neighborhood is significant and the dilemma has reached a climax: on the one hand, they desire compensation arrangements, and on the other, heavy fear of the reaction of the Arab street if the Arab families agree to a settlement with “the settlers.”

“We have become prisoners inside our homes,” says a resident of the neighborhood. “Where will we go? The court is against us, the Jews have proved ownership of the land and our lawyers represent themselves and the Palestinian Authority.”

Members of the Arab families living in the area told TPS that the teams of lawyers who have acted on their behalf in recent years are responsible for the current situation, in which the residents are expected to be evacuated from their homes after refusing settlements offered by the court.

The Jerusalem District Court recently rejected several appeals and ruled that the eight Arab families who have lived there illegally for decades should be evacuated. The court initially offered them to pay rent to the Sephardic Community Committee, which owns the land on which the Jordanians built the homes, but they refused to do so and were therefore ordered to be evicted.

The residents claim that the lawyers dragged out the affair for a long time and this entailed heavy expenses in fees and charges, but even worse, “compensation arrangements or alternative housing offered in the past are no longer on the agenda after they were rejected by our lawyers, without asking us and without our knowledge.”

“Until 1991, we were granted protected tenant status,” says a resident of the neighborhood who wishes to remain anonymous. “However, lawyers appointed with the intervention of the Orient House and the Palestinian Authority pressured us not to pay rent because we would have recognized Jewish ownership. Since then, anyone who raised the need to return to the protected tenant option has been threatened by PA representatives,” they said.

Residents who sought to pay the rent in 1993 were warned that they were likely to be harmed if they acted against the lawyers’ recommendations. Even now, residents are warned not to engage in the matter even in the WhatsApp groups.

Written and other testimonies that came to the attention of TPS indicate that the Palestinian Authority blatantly intervened in the matter and the case was managed by the Orient House until it was closed by Israeli authorities. For example, it turns out that in 2010 one of the lawyers representing the residents fell ill and his colleague was appointed in his place, but he was forced to resign under pressure from the Palestinian Authority to make room for a lawyer on its behalf and which was acceptable to the PA.

And why am I certain this is true?

Firstly, I heard something similar, before I read the report, from a friend who is also a local government official. They told me how the Arab families wanted to just settle and be protected tenants, but then suddenly changed their minds. This official said “it was as if someone whispered something in their ears.”

Secondly, this is what Israellycool contributor and friend Ryan Bellerose wrote:

When I was on my second trip to Israel I was taken to this house in Shimon Hatzadick and I met some of the arabs who lived in the building adjacent to it. the conversation did NOT go like I thought it would. One of them was incredibly bitter about the Lawyers the PA FORCED them to hire. yes you read that right, the PA selected the lawyers but doesn’t pay them, the families are forced to pay for the lawyers who do not actually represent them, the Lawyers never had their clients best interest at heart and instead made this all into the balagan that it is now.

I have even seen Jews saying how terrible this all is but none of them really knew who was to blame.so the default is to blame the Jews. The PA knew that the Jews had concrete ownership yet they dragged this out in the courts because they knew the europeans and stupid american bleeding hearts would make it almost impossible for Israel to follow the law. people don’t seem to know that this was in court for almost 20 years and in arbitation for years after that, and then appeals.

When I was there, I was told several compromises had been offered, 1- was pay rent, 2- was be given money to move elsewhere (which is RIDICULOUS, imagine having to pay a tenant to move.) not only were these people told not to take either offer, they were in fact threatened and used as propaganda. experts in land ownership were actually upset because there are cases where arabs had solid claims of ownership but since those places were not in Jerusalem, the NGO’s and the PA didn’t care about fighting for them and focused on this case where the Jews claims were already known to be iron clad.

when I left there, I was asked not to be public about what was said because it could result in them being harmed. most people don’t know this , but if you sell land to the Jews you can be killed (and often are) but since this is now becoming public, I feel ok in writing this now.

The world should be shouting out at the PA in disgust over this, and not pointing a finger at Israel. That is, if they truly cared about these poor people being used as political pawns, and not about simply demonizing the world’s only Jewish state.