Losers All Round: BDS Movement Rejects Hatari’s Protest at Eurovision

No, I am not referring to them placing 10th in the final (which, if you ask me, was way too high for their “song”, and I use that term loosely). It is what they did after the public votes were announced.

These “principled” people, who hate us so much, they were unmoved by the rocket barrage on Israel (not to mention our hospitality, food, drinks, accommodation, transport, and even applause) – were not willing to refuse to come and perform here, despite constants calls from the BDS Movement. No, they wanted to have their cake and eat it. And don’t think this wasn’t noticed by the boycott movement.

On top of being criticized by their allies, a punishment may be meted out – and not in the way they like.

The European Broadcasting Union has hinted at punishment for the Icelandic delegation following Hatari’s protest at the Eurovision Song Contest final. Tensions have been high this year at Eurovision due to the host country Israel’s occupation of Palestinian territories, with calls for artists and viewers to boycott the contest. And during the voting, Iceland’s act Hatari showed their support for Palestine by holding up flags and banners reading ‘Palestine’ when the camera cut to them in the green room. The EBU, which runs Eurovision, said of the protest: ‘In the live broadcast of the Eurovision Song Contest Grand Final, Hatari, the Icelandic act, briefly displayed small Palestinian banners whilst sat in the Green Room. The Eurovision Song Contest is a non-political event and this directly contradicts the contest’s rules. ‘The banners were quickly removed and the consequences of this action will be discussed by the Reference Group (the contest’s executive board) after the contest.’ The rulebook states that artists may not promote any political cause at Eurovision, with disqualification being threatened.

Rule 2.6 reads: ‘The ESC is a non-political event. All Participating Broadcasters, including the Host Broadcaster, shall ensure that all necessary steps are undertaken within in their respective Delegations and teams in order to make sure that the ESC shall in no case be politicised and/or instrumentalised. All Participating Broadcasters, including the Host Broadcaster, shall ensure that no organisation, institution, political cause or other cause, company, brand, product or service shall be promoted, featured or mentioned directly or indirectly during the Event. ‘No messages promoting any organisation, institution, political cause or other, company, brand, products or services shall be allowed in the Shows and within any official ESC premises and/or event (i.e. at the venue, during the Opening Ceremony, the Eurovision village, the Press Centre, the Press Conferences, etc.). A breach of this rule may result in disqualification. The lyrics and/or performance of the songs shall not bring the Shows, the ESC as such or the EBU into disrepute. No lyrics, speeches, gestures of a political, commercial or similar nature shall be permitted during the ESC. No swearing or other unacceptable language shall be allowed in the lyrics or in the performances of the songs.’

What losers – in every sense of the word.

Update: Actually, the level of fail is worse than first thought. One of the band members looks like they were wearing Jewish tefillin (phylacteries) 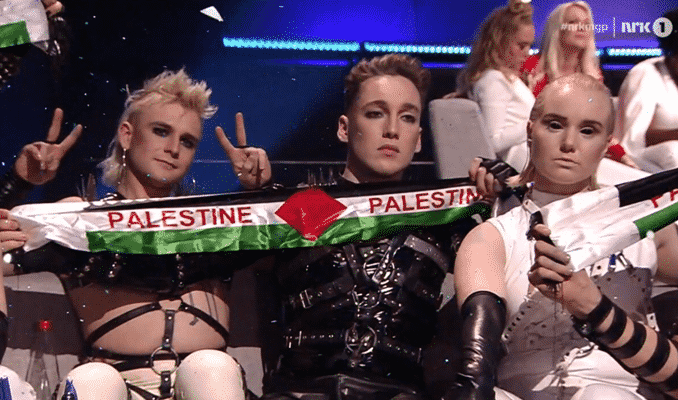 Update: These losers trained and worked out at Churner House in Jaffa. “Boycott boycott but when it comes to receiving free training grounds they were happy to oblige.”