Last week, I posted how a reading of terror-inciting children’s book “P is for Palestine” was a complete bust. Since then, the author Golbarg “not Goldberg” Bashi has posted an enlightening post on Facebook – enlightening in the sense that it seems to confirm my opinion that she is a Jew hater.

Photo by David Letwin, dear friend and member of Jews for Palestinian Right of Return.

I read this as “some of my best friends are Jewish.”

Here I am reading and engaging with 3 innocent children who were accompanied by their Zionist fathers and a grandmother to Sunday’s event at Highland Park Public Library in the State of New Jersey. I had been informed by the head of the library that all seats in the reading room had been immediately reserved in person by Zionist Highland Park Library Card holders on the day registration for the event opened up (October 4th–unbeknownst to us all!).

Still, the 3 innocent children who attended the reading (albeit under the unfortunate watchful and weary eyes of their Zionist families–two fathers, and one grandmother) brought a genuine smile to my heart.

I started off by my showing them my good-luck charm, a keyring featuring “Lilla My” a very mischievous character (a Mymble in fact) from the Swedish-speaking Finnish children’s author Tove Jansson legendary book series Moomin (1950). I asked the children’s librarian if they had any of the universally-loved Moomin books in their catalogue. They did not. Instead they have 42 books for children and juvenile readers on Israel, which is absolutely fine and no one has ever opposed and neither should be allowed to.

I loved chatting to the cheeky little 6 year-old boy in first-grade who told me the meaning of his Hebrew name in English and that his favorite subject in school is “snack.” I told him that my own first-name is GolBaRG which means flower petal in Persian, a language that is spoken in Iran–the mere mention of Iran drew the child’s father to laugh out loudly (heckle) and make uncomfortable gestures).

The 6 year-old little boy was sharp, engaged and so cute! His brother in 5th grade spoke of his love of sports and the NFL, and someone named Adam who plays for the NFL (when I asked him if the NFL is basketball, he patiently explained that the NBA is basketball) and told me his favorite subject in school right now, takes place during second period and currently involves a particular mode in Jewish religious ethics, named “mitzvah” or “the obligation to return lost objects to their owner.” The 5th grader enlightened me on what applies within mitzvah and what one must do when finding e.g. a lost purse as opposed to a pencil belonging to an unknown person on the street.

Blogger Elder of Zion received an email from someone there, which confirms her account, while providing more information.

In the end, three children and their parents showed up, with the boys wearing kippot.
One of the boys was asked by Bashi, “What is your favorite book?” His answer “The Mishna ! “. When she followed up to ask him what book he was reading, he said “Bava Metzia ! “

In other words, Bashi had an encounter with obviously religious Jewish children, yet described their families as “Zionist.” Plus what does she mean by “I had been informed by the head of the library that all seats in the reading room had been immediately reserved in person by Zionist Highland Park Library Card holders.”? I highly doubt the head of the library would have described those who reserved the seats as “Zionist,” (they may have perhaps said something like “reserved by members of the local Jewish community), and I am not aware of any library named the Zionist Highland Park Library.

In other words, Bashi is describing religious Jewish families as “Zionist,” used in a derogatory sense. She is confirming she is an “anti-Zionist-not-antisemite.”

They asked fun questions, were incredibly attentive, and had the most creative suggestions on words that start with certain letters of the alphabet. For example for the letter A, our 5th grader suggested that the certain Adam who plays for the NFL and [אַבְרָהָם,] Avram (Prophet Abraham or Ibrahim (to Muslims), the name of the first monotheistic Prophet, and of great significance to millions of people who adhere to Abrahamic religions, namely Muslims and Christians.

But not Jews, apparently.

Curiously the library had just celebrated an event titled GET TO KNOW A BANNED BOOK: ASK A LIBRARIAN as part of the bogus Banned Book Week Celebration across US libraries and bookstores (only to sell/promote best-selling books once challenged in a tiny town, a non-powerful lobby who doesn’t cry wolf ALL THE TIME–books like e.g. Harry Potter)–The Celebrating Banned Book Week event at Highland Park was an open-to-all fiesta on liberal hypocrisy.

Gee, I wonder which lobby it is to which she is comparing. Not an antisemitic meme to speak about such a powerful lobby; no, not at all.

Likewise, no antisemitic comments or tropes were made during the making of this rant:

Days later, the library proudly presented, in near hagiographic style, the bio, image of a non-US Israeli authors visiting the tiny library to read her poems, an open to all event (let’s talk about how tax-payer monies are used). I honestly couldn’t have cared less if this wasn’t about the First Amendment and the shameless audacity of a tiny self-entitled racist minority (we’re talking a maximum of 30 die-hard Zionists) who invoke the tragic memory of the Holocaust and European Christian anti-Semitism and bloody pogroms to cry wolf in front a mostly white Christian American library-staff who for some reason still feels guilt over crimes their ancestors may or may not have committed against the European Jewry all the while Israel sits on stockpiles of nuclear weapons right now, coerces the US government into paying them 4.8 BILLION DOLLARS of Our US-TAX PAYERS MONIES every year and dictates the United States’ foreign policy in the region (as an example forcing Obama to include Iran in the Muslim ban, forcing Trump to hire John Bolton, move the US Embassy to Jerusalem, abandon the nuclear deal with Iran, place further crippling sanctions on innocent Iranians and beat the drums of war on a country with over 80 million inhabitants–and still play the role of the victim, silence anyone from mentioning the mere name of Palestine. So stopping a tiny book celebrating Palestinian culture and childhood frightens the wits of them. And for decades this small irrelevant racist minority had gotten used to getting their way, shutting down anymore who may have dared speak on behalf of Palestinian freedom in the US, but things are changing, Americans are now hearing the voices of children in Gaza directly, they are seeing through their sheer lies of Zionists, their constant abuse of real anti-semitism and as a result increasing numbers of young progressive Jews no longer want to have anything to do with the Zionist community (however much they bribe them into go on Free-of-Charge Birthright “Aliyah” trips to Israel, have their youthful spiritually abused on religious tours, drunken parties with IDF solders all paid for by the notorious sexual predator Michael Steinhardt and the sleazy, corrupt, union-busting, far-right casino multi-Billionaire Sheldon Adelson among others).

Then there’s this straight from the Linda Sarsour playbook:

Unbeknownst perhaps to white-supramcists (sic.) and their Zionist allies, Highland Park’s demography has changed over the years and it has become far more beautifully diverse.

Comparing Israel or Israel supporters to Nazis is also antisemitism.

And you caved in to the bluff harassment of a tiny racist minority who have pledged allegiance to an Apartheid State, and they are aiming to destroy whatever good we have left in this one.

And how about the “Zionists are all White, European colonizers” trope? Got that covered too!

All the while thinking how dare they defame ME, a veteran anti-racist feminist activist of the heinous crime of anti-semitism, robbing me of making a descent living (in academia as well as in publishing), damaging my health (more on that later), and racially-profile me–No Native Americans ever asked them where in England, Poland or Russia they come from?)…

And in case you still do not think she means ‘Jews’, consider this comparison

if a Muslim or a mosque had made the slightest complaint against my book, they’d invite the TV cameras showing the police bomb sniffer dogs brought in to clear the library…

Upon reading the page for B is for Bethlehem, the 5th grader’s father sternly instructed him to ask if Jews can also live in Bethlehem…

She does not record her answer, but we know the correct answer would be “no.”

And for an antisemite, she has a hell of a lot of chutzpah:

These innocent children had been instructed by the fathers/and the grandmother that they were there to protest and yet their beautiful eyes gleamed, and their excitement over being asked questions and engaged in playful discussion was unmistakingly palpable, and we could have talked and joked for many more hours. Until the furious father and grandmother of the two boys yanked them from their seats, and without even giving the children a chance to say goodbye, rushed out of the reading room–the other father soon got up too and said they had a birthday party to attend to and he refused to accept a rare copy of my P is for Palestine as a gift for his clearly disappointed little girl who wanted nothing more than staying to have a one-on-one with me, sitting on the floor, talking, joking, and reading.

Gee, how could the father refuse such a generous gift of a book glorifying terrorism, against people like him and his child? 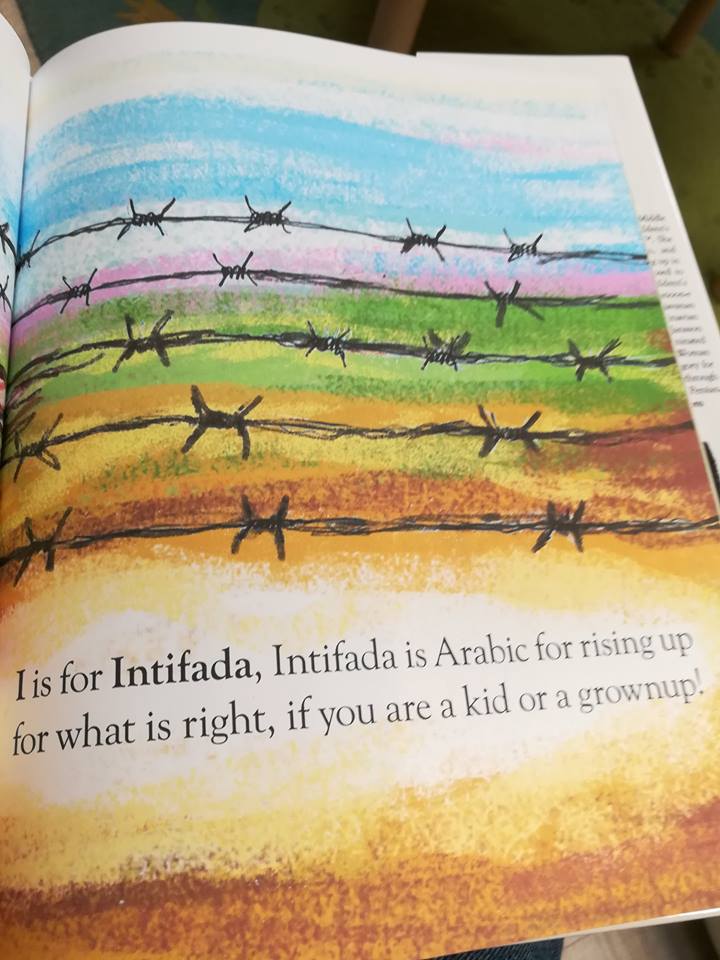