It is not just the missiles flying overhead – I have spotted a pig up in the sky. Haaretz’s Amira Hass – an apologist for palestinian terror – has reported how a missile that hit the fifth floor of the Al-Harara office building in Gaza City, scoring a direct hit on the office of Palestinian Independent Commission for Human Rights, was in fact a palestinian missile that went astray. 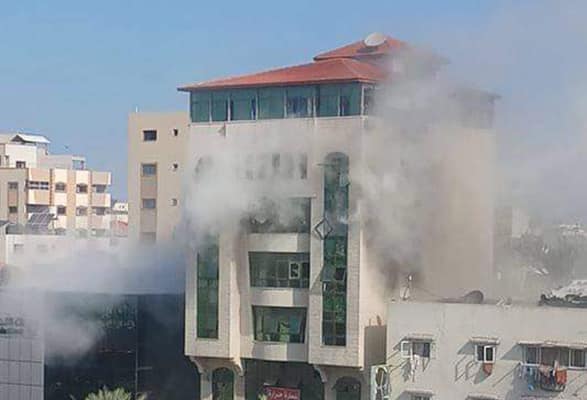 At about 10 A.M. on Tuesday, a missile hit the fifth floor of the Al-Harara office building in Gaza City, which is across from the Palestinian Legislative Council building. It’s a missile that went astray on its launchers, almost certainly members of Islamic Jihad.

Ironically, it scored a direct hit on the office of Palestinian Independent Commission for Human Rights, which scrutinizes the Palestinian authorities and reports on their violations of human rights, civil rights and the rule of law in the enclaves of the West Bank and the Gaza Strip.

Israeli sources told Haaretz that the missile wasn’t Israeli. But one could have concluded that it was a local missile just from the silence that Palestinian media outlets imposed on themselves regarding the hit and the destruction it caused to the lowest of the three floors that the commission occupies in this elegant building.

In Gaza, one cannot keep it a secret when a local rocket or missile falls inside the territory and even causes casualties among Palestinian civilians. But what is shared by word of mouth isn’t reported by the Palestinian media, and certainly not in real time. Even without orders from above, self-censorship is at work.

This is purported to be video of the rocket fire in question:

Video from the @Reuters livestream via @RelicHq showing the errant Palestinian rocket falling short and hitting the Palestinian Independent Commission For Human Rights building in Gaza. Not an Israeli airstrike. pic.twitter.com/P76Dx0RyIU

This did not stop the scum and villainy from blaming it on Israel. 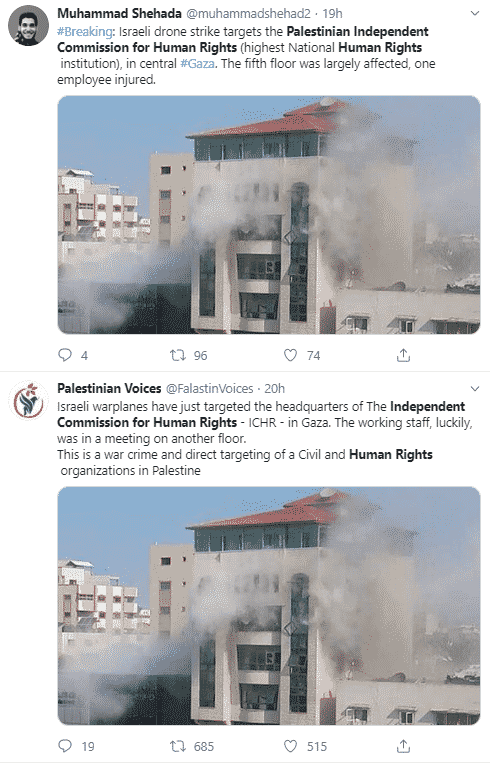 Amnesty, in typical fashion, automatically condemned Israel but then later admitted there was “conflicting information” regarding where the attack came from. 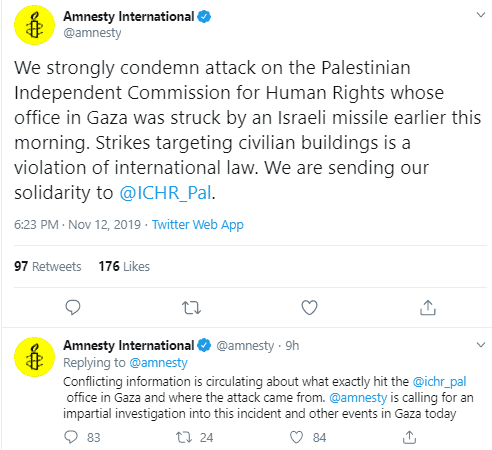 While Code Pink released a statement condemning Israel for “attacking Gaza” (written by Kaddish reciter Ariel Gold) which included this:

Earlier today, Israel bombed the office of the Palestinian Independent Commission for Human Rights (ICHR). The office was severely damaged and one of the ICHR staff,  Bahjat Al-Helu, was injured. “Six years ago, I worked alongside Mr. Al-Helu at ICHR as an intern and I condemn the attack on this important human rights organization.

They have not retracted it, despite the preponderance of evidence it was a stray Gazan rocket.

This is, of course, not the first time the haters have blamed Israel for damage and injury caused by an errant palestinian-fired rocket, and they certainly will continue to do so, as long as they realize people will certainly remember the accusation, and not necessarily the proof it was a lie.

Israel did not strike this building. A rocket misfired from Gaza.

I was across the street when it happened. https://t.co/co73PIQooc