A few days ago, I posted about the return of the flood libel, the discredited lie the haters keep turning to every Winter there is flooding.

One of the haters who has done just this is Frances Black, Irish singer and the senator behind the infamous Occupied Territories Bill, which seeks to criminalize commercial activity beyond the 1967 lines (hat tip: Michal). 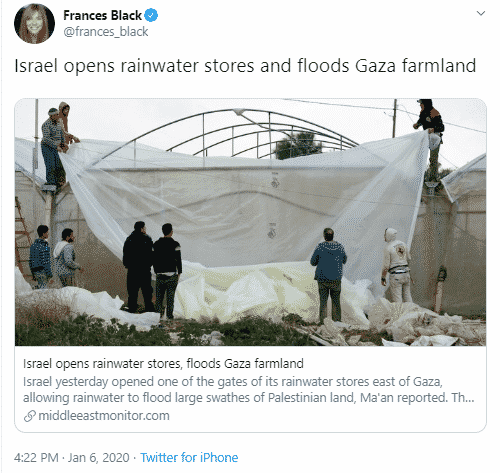 Despite being tweeted evidence this is a libel, Black has not deleted her tweet or issued a retraction – almost two days later. But she has found the time to tweet other things.

Once again, a hater resorts to deliberate lying to advance their agenda – the demonization (and ultimate destruction) of the world’s only Jewish state.

But do tell me she is not antisemitic.