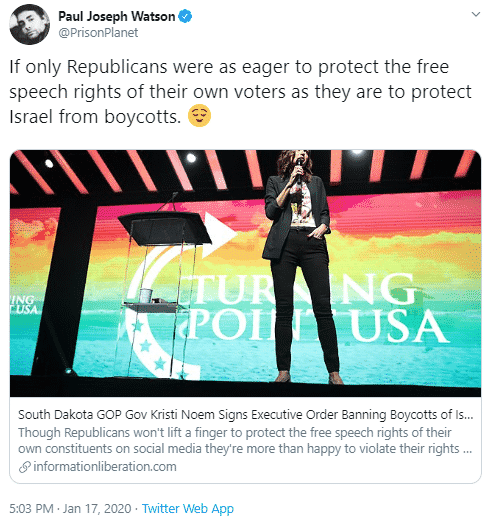 Regarding your latest anti-Israel tweet (January 17), couldn’t you have just advocated for free speech on all social media, and demand more from people in office, without grabbing the low hanging fruit of Israel hatred?

Israel anti-boycott laws do not prohibit individuals from choosing to buy or to refrain from buying products, Israeli or otherwise. They do not interfere with an individual’s freedom of speech. And, Israel anti-boycott laws do not require owners and managers of a company to buy from Israel. They simply protect them to proceed as they wish without concern from the venom of the likes of people who seek to destroy a free, productive and progressive country 1/12 (one twelfth) the size of the United Kingdom.

Since there is an aggressive campaign against Israel being brought on by an endless list of  influential haters, who don’t really have free speech advocacy as a concern but malevolent goals, American business owners being forced to proceed the way the anti-Israel (often anti-West) bullies demand are being protected by anti-boycott laws as much as Israelis are.

What the anti-boycott laws do is actually protect businesses and consumers from losing out on the accessibility to purchase technology, medicines and goods from Israel.

To break it down. Let’s say that an owner of an American company wants to work with Israelis to make a better agriculture product from a unique Israeli invention. But, along comes the angry Jew-hating crowd that says that if that American business owner doesn’t discontinue working with Israelis, he or she will face negative consequences – consequences ranging from consumer boycotts against that business, to maybe threats against the business owner, managers and other workers. That puts the owners and managers of an American company in a bind. If they continue to work with an Israeli company that’s on the cutting edge of technology, as so many Israeli companies are, then they will end up losing business (or fear for their safety) due to the pressure from people under the influence of an aggressive, regressive, angry, and destructive movement.

The time, money and brain power used to smear and destroy – or – to maintain and explain a little country that’s 2 tenths of one percent of the entire Middle East is maddening.

I’ve seen the approval that you’ve gotten from the comments in that Twitter post.  Is that really what you’re aspiring to?

I know that I’m not alone in hoping not.

Faith Quintero is the author of Loaded Blessings, among the Federalist’s top books of 2019 list.

Aussie Dave adds: Faith is way more polite than me. I see this latest tweet as yet another indication that PJW is really not one of the good guys.