Antisemite Linda Sarsour hates the Jewish state so much, she disseminates any stories that paint us in a bad light.

Yesterday, she retweeted this story about Israelis protesting “the erosion of democracy” under Israeli Prime Minister Binyamin Netanyahu, a regular target of her vitriol. 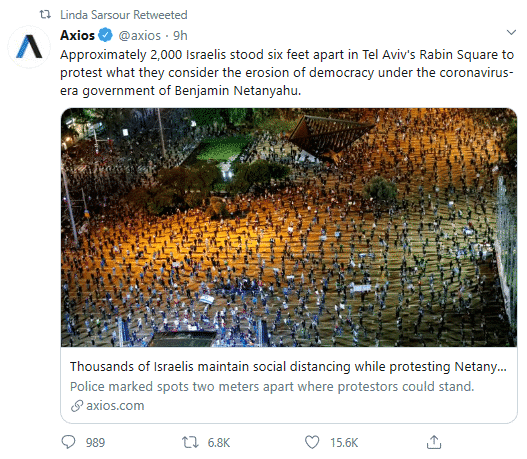 I am guessing Sarsour did not give it too much thought.

Had Sarsour actually read the report she disseminated, she would have seen this:

The big picture: The “Black Flag” demonstrations, which began in March, are a response to stringent coronavirus policies that include phone tracking for civilians. Police marked spots on the ground where protesters could stand, and organizers were required to provide participants with masks, Haaretz notes.

Perhaps she did read it, and instinctively felt it was showing Netanyahu to be a dictator.

What it does show is this: Recognizing the right of people to protest in a democracy, the democratic state of Israel has allowed demonstrations, despite all the other restrictions in this period of coronavirus. And the fact protesters kept their 2-meter distance is a positive reflection of the efforts of many Israelis to keep the rules, even if they are unhappy with a lot of them.

In other words, the report actually is a positive reflection of Israel as a democracy and Israelis as people generally following the restrictions under coronavirus.

So thanks Linda for spreading the word!