Of Lists and Affirmations

In honor of Israeli Independence Day, a group called Social Lite Creative has compiled a list of the Top 50 Zionist Influencers of 2020. The list was “based on over 600 nominations from communities around the world” and “chosen based on the number of followers as well as the impact these individuals have on their respective communities.”

I was honored to have made the list, coming in at 39.

Truth be told, I do not put too much stock in to such lists (and cringe at the word “influencer”). I get affirmation as to what I am doing every time someone shares one of my articles or videos, shoots me an email or comments, telling me I made a difference, donates (!), uses the words “BDS-hole”, “Hamas-hole” or “Shirley Temper” in everyday speech, or when an antisemite spreads lies about me.

But I am fine celebrating this list at least a bit because 1. it was created by pro-Israel activists, in order to help give publicity to fellow activists, and not to, say, just drum up business (like this list); 2. almost everyone on the list actually does pro-Israel work (I did say almost); 3. there are people on that list I would actually include on my own list, were I to compile one; and 4. it is Israel’s birthday party so why not.

Having said that, an even bigger honor for me was this response by Aboud Dandachi, a former Syrian refugee who also appeared on the list. 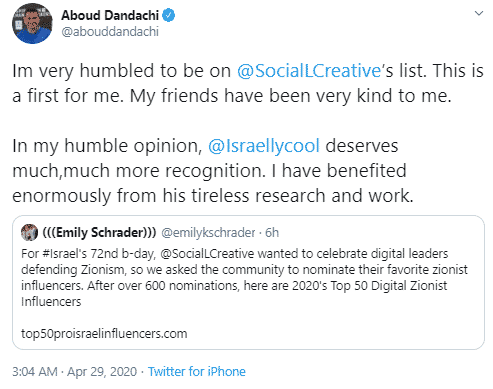 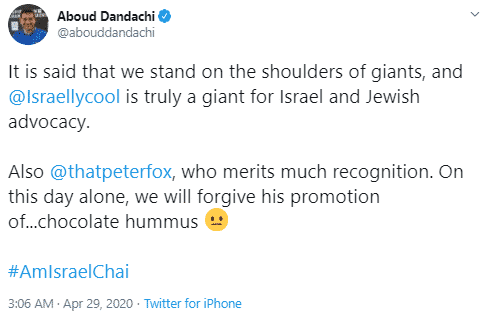 Aboud is relatively new to the pro-Israel world, having been brought up on a diet of antisemitism and anti-Israel incitement. So him expressing these sentiments is a real affirmation of my work and what I am trying to achieve with it, much more so than any list.