The Oregonian reports on Portland news reporter Jenny Young, who has been criticized for calling BDS “an anti-Semitic movement” (hat tip: Mark)

Leaders of civil rights organizations spoke out Tuesday night after a reporter from a Portland TV station tweeted a message that many groups viewed as anti-Palestinian from a professional account while covering a protest.

Jenny Young, a reporter with KOIN, was at a rally at Peninsula Park in North Portland, and tweeted about a speaker who praised the BDS movement. BDS, which stands for Boycott, Divestment, Sanctions, is a Palestinian-led movement, which upholds the principle that Palestinians are entitled to the same rights as the rest of humanity. 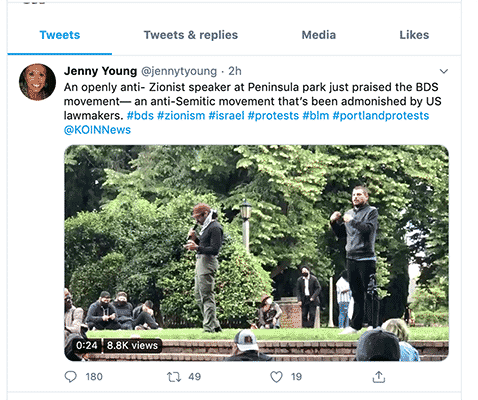 Young described the speaker, who was not identified, as “openly anti-Zionist”, and the BDS movement as “an anti-Semitic movement that’s been admonished by U.S. lawmakers.”

According to the Palestinian BDS National Committee, the BDS movement fights against Israeli occupation of Palestinian land, and discrimination against Palestinian citizens and refugees.

The tweet came on the eve of Israel’s expected announcement of plans to annex a massive portion of Palestinian land.

Neither Young nor KOIN responded to requests for comment. Young deleted the tweet about an hour after she posted it, and it had drawn nearly 200 comments, most of which criticized the characterization of the BDS movement.

I applaud Jenny Young for her honesty – she was right.

Make no mistake about it; the BDS movement is antisemitic. Check out the Israel’s Ministry of Strategic Affairs report released late last year, which shows exactly how (replete with actual proof). I have also documented on here how those who support BDS so often hold demonstrably antisemitic views. Even Roger Waters has admitted to crossing the line, which is not surprising given the boycott of Israel is – as fellow musician Nick Cave has said – “antisemitic at heart.”

This is also the view of others like the German parliament, Canadian PM Justin Trudeau, and former British Foreign Secretary Jeremy Hunt. It is just a shame Jenny was bullied in to removing her tweet.

Bob Horenstein, spokesman for the Jewish Federation of Greater Portland, said he felt the reporter’s tweet was an oversimplification of the issue, but said he also took exception with some other organizations’ characterization of the BDS movement. He said the Jewish Federation of Greater Portland had made their stance on the Israeli-Palestinian conflict clear.

“We came out with a statement opposing unilateral annexation of the West Bank. We support a two-state solution,” he said.

By the way, the entire The Oregonian is a disgrace. The title Civil rights organizations decry Portland TV reporter’s tweet about Palestinian liberation movement gives it away, but the claim that BDS “upholds the principle that Palestinians are entitled to the same rights as the rest of humanity” is a gross simplification of a movement that is more about destroying the Jewish state than anything else.