Yesterday, he accused Dr Einat Wilf of referring to palestinians as mosquitoes. 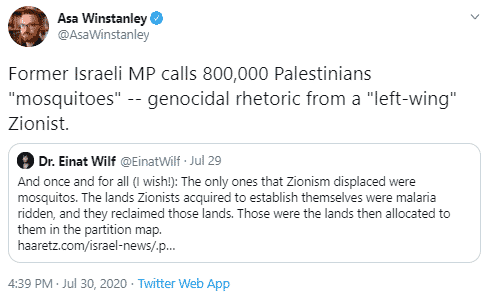 If Asa had put his “investigative” skills to good minimal use, he would see that Dr Wilf was literally referring to actual mosquitoes (the word “malaria” in her tweet was a bit of a giveaway).

Incidentally, I have also dealt with this topic, and as I wrote at the time:

That same League of Nations Commission concluded its report with the observation that the anti-malaria works and methods that they had seen in Palestine “destroyed pessimism, raised hopes” and those involved in this work were “benefactors not only to the Palestinian population but to the world as a whole”

But back to Asa. I don’t believe he missed a beat here. Given the obviousness of what Dr Wilf was referring to, plus the fact he has kept the tweet up despite being corrected countless times, it is obvious to me that he deliberately misrepresented her words.

But no surprises here. When you hate Jews, you are willing to lie to try and achieve your goals. And here, he is trying to show that even a “left-wing” Zionist is evil, because he wants to do away with the Jewish state.

If only he saw us as higher life forms than mosquitoes.