Last month, I posted how BDS-holes Stavit Sinai, Ronnie Barkan and Majed Abusalama were schnorring for money to cover “the mounting legal fees as well as the educational activities that lie ahead” in the wake of their upcoming trial on charges of trespassing and assault. They denied they committed the alleged acts, even though video they themselves included on the GoFundMe site suggested they did.

Earlier this week, Stavit was convicted of assault. 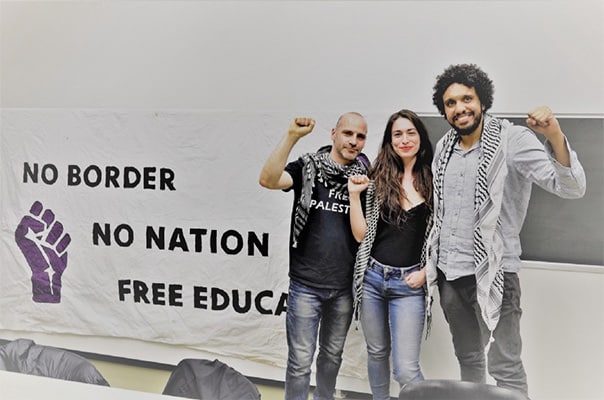 A Berlin court convicted on Monday a BDS activist for assaulting people during a presentation by an Israeli survivor of the Holocaust at the Humboldt University in the capital.

In a dramatic setback to the Boycott, Divestment, Sanctions (BDS) campaign claim that it is a non-violent initiative targeting the Jewish state, the Berlin court declared Stavit Sinai guilty for her violent conduct.

The Berlin daily B.Z. titled its article about the BDS activists at the trial: “It is so shameful. Disgusting hatred of Jews in and in front of the Berlin courtroom.”

Sinai’s conviction appears to be the first criminal penalty for violent BDS activity in Germany.

The paper reported about the anti-Israel extremist: “Lecturer Stavit S. is guilty. She hit the door of the hall ‘wildly’ from the outside, injuring two people… Either she pays €450, or sits in prison for 30 days.”

But do tell us how BDS is not violent.

While the court dismissed the criminal trespass charges against Barkan, Abusalama and Sinai, it seems from Barkan’s own blog post – which declares the entire verdict as a victory – this was done on technical grounds.

The trial started with the judge negating the trespassing charges altogether on the basis of formality flaws by the prosecution.

Meanwhile, a statement Stavit tweeted out has dropped the whole “I didn’t do it” pretense, and instead adopts the “I do not regret my conduct” approach. She also states she wants to go to prison instead of paying the fine. 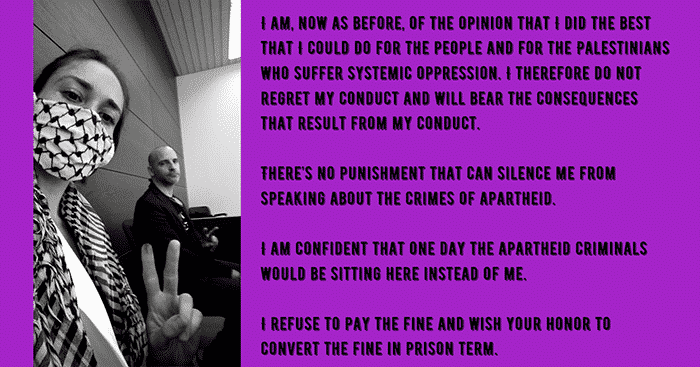 I guess for 30 days at least, Orange will be the new keffiyeh White/Black.