A few days ago, antisemite and Israel-hater CJ Werleman tweeted out an anti-Israel report claiming we executed an innocent young palestinian man in Jerusalem’s old city. 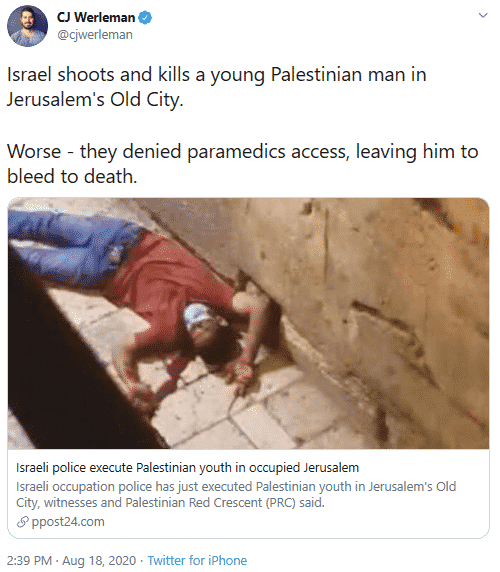 Of course, this is not what happened – the man was a terrorist who had stabbed a police officer, as clearly indicated by surveillance footage. And Werleman knows this because many Twitter users pointed it out to him.

Given Werleman claims to be a journalist, he should never have tweeted it to begin with – the footage was readily available, and a real journalist would check the available information first.

And that’s the problem here: Werleman is not a real journalist trying to report the truth. He is a propagandist and serial liar with an anti-Israel and anti-Jewish agenda.

Don’t believe me? This is yet another in a litany of examples including:

He has also done the same thing against India.

This guy should not be getting any legitimate journalism gigs. Help make that a reality by spreading the truth about him.