It attempts to paint a picture of a desperate people driven to despair, launching small, crude devices only as a way to send a message, while actively trying to avoid any loss of life or property. 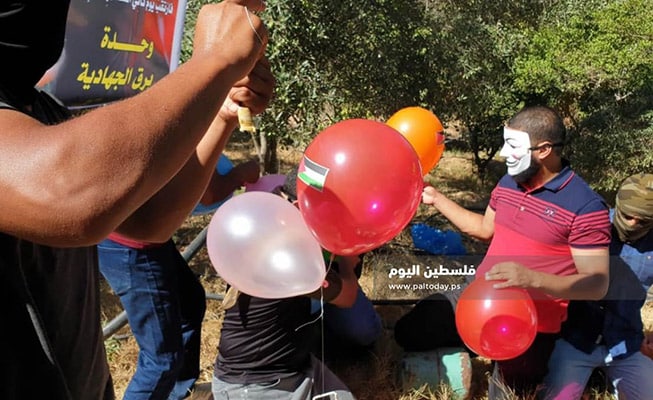 For the past two weeks, a group of seven Palestinian men have camped close to the buffer zone separating the Gaza Strip from Israel in the early hours before dawn.

But this is no ordinary camping trip. Among their supplies are gas cylinders, small inflammable cubes, balloons and Guy Fawkes masks, which they wear to conceal their identity.

The Palestinians call themselves the Barq (Lightning) Unit – one of several groups involved in floating “fire” balloons and kites into Israel.

Hiding between the bushes and olive trees, the men fill the balloons with helium, group them in a bundle, and then attach a small incendiary object to their tail.

Once the wind direction is right, they launch the objects discreetly in the direction of empty areas within Israel that are close to the buffer-zone fence.

The balloons, which Israel has described as “arson attacks”, have been causing large fires on some agricultural land.

While no Israelis have been hurt, the airborne devices have prompted Israel to bombard the Gaza Strip for 10 consecutive days – targeting Hamas field training facilities and monitoring points without causing any Palestinian casualties.

“We came here to send a fiery message to the Israeli occupation that we in the Gaza Strip can no longer tolerate the blockade that’s been taking place for 13 years,” Abu Yousef, the spokesman of the Barq Unit, told Al Jazeera.

“We would like to send a message that we deserve a decent life to our families and loved ones,” the 24-year-old added.

The most senior group member, who goes by the nom de guerre of Abu Obaida, said they turned to these tools to challenge the blockade because they increasingly feel “nobody is looking at Gaza” and resorted to this tactic seeking to “alleviate the miserable situation on Gaza”.

“The world is looking the other way,” the 35-year-old father of five said. “We don’t have any enmity with the Jewish people. Our battle is against their government that has been besieging us for 13 years.”

Despite the increased measures of collective punishment on the Gaza Strip, the Lightning Unit is adamant it will continue its activities, which members say is a means of pressuring Israel to lift the devastating blockade on Gaza.

The harsh economic conditions have driven the Barq Unit to challenge the status quo, the members said. While they all have university degrees, they are all unemployed – as part of what the World Bank has described as the highest unemployment rate – 45.5 percent – in the world.

“My children deserve a decent and dignified life. I’m here today because when I look into their eyes, I can only see that I cannot provide for them.”

Abu Yousef said he cannot afford to buy the basic necessities for their school, and had to borrow used uniforms from neighbours.

“We are not terrorists as Israel claims,” Abu Obaida said. “We don’t want to burn anything or hurt anybody. I recently graduated in public relations and marketing with top marks but couldn’t find a job afterwards.

Here is how the Paltoday website characterizes the Jihad Barq Unit when they are reporting in Arabic to their own people:

And this is from the Shms News Agency:

Hardly the message that they are aiming for “empty areas” in Israel, or that their purpose is just to send a message to us. Rather, it sounds to me like they are trying to inflict maximum loss of life and property as an act of revenge.

Bear in mind, that some of these devices land in or near kids’ playgrounds and even schools.