Jewish Voice for Peace have tweeted “a little sweetness” 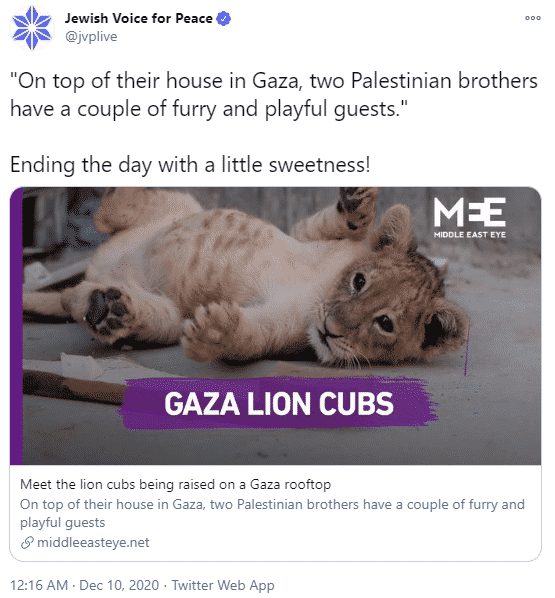 It links to this video

I have posted about these lion cubs before. This is not sweet, it is animal abuse, and even Gazan vets acknowledge that

However, Amir Khalil, a veterinarian who has led several trips to Gaza by the animal welfare organisation Four Paws to rescue mistreated zoo animals, said he was alarmed to hear about the cubs.

“I advise the Gaza authorities to take away those lions,” Khalil told Reuters by phone from Pakistan.

Khalil also feared for the cubs’ own welfare.

“Raising lions at home may deprive them of health, sufficient food and medical care and may result in acute health problems. Especially to the muscles, joints and bones,” he said.

Asked about the lion cubs, Hassan Azzam, director of veterinary services at Gaza’s agriculture ministry, said they had received no complaints, but that the ministry intended to investigate.

“Palestinian law does not permit raising wild animals in people’s homes,” he told Reuters. “Wild animals must be kept in proper zoo houses.”

But it is no surprise a group of people who think palestinian terrorists are comparable to Warsaw Ghetto resistance fighters would consider animal abuse to be sweet.