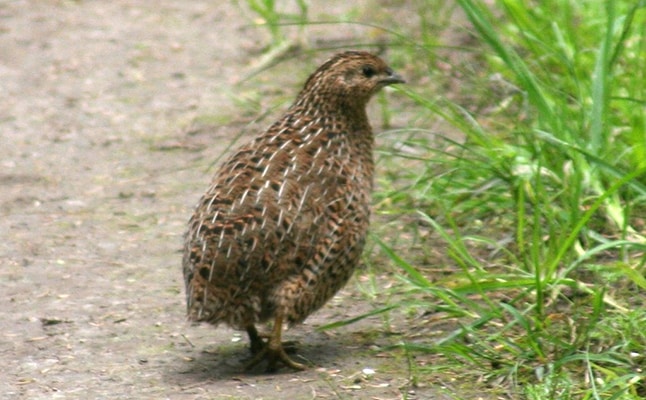 Some people here are finding creative new ways to

earn a living in the face of high unemployment that is destroying the present and future of many.

Ibrahim Abu Odeh, 34, from the city of Khan Younis in the southern Gaza Strip, is one of them. Refusing to lose hope even as unemployment reached nearly 50 percent, he started the first quail farm in the besieged coastal enclave.

Hunting migrating quail on their way from the freezing climes of Europe to the warmth of the Middle East has become a vital source of income for many unemployed people in Gaza who sell them in local markets to make ends meet.

Gaza has been under an Israeli blockade for 14 years, severely restricting economic activity, especially fishing which used to be a major source of income for Palestinians in Gaza.

Now, the fishing nets are being hung between wooden poles along the shore, allowing the “quail hunters” to catch the migrating birds as they arrive from Europe.

According to a report published by the Euro-Mediterranean Human Rights Monitor in January 2021, the unemployment rate in Gaza Strip jumped to 56 percent after 14 years of the Israeli blockade of Gaza, compared to 40 percent in 2005.

Abu Odeh’s father, Nasser, is one of the people who had to stop fishing as a result of the Israeli siege.

“The quail-breeding project has provided me with a source of income … the Israeli sea restrictions and the bans on importing new boats and fishing material have destroyed the fishery industry,” he said.

Even though they no longer fish, the family still faces major challenges because of the blockade.

“The biggest challenge is the electricity outage for more than 16 hours per day, so I installed a solar energy system to decrease the operational cost of using fuel for lightening. In addition, the price of feed has steadily increased,” said Abu Odeh.

“Quail is easy to raise and does not need a lot of space and its reproduction is rapid in addition to being less diseased,” said Abdul Fattah Abd Rabbo, associate professor of environmental sciences at the Islamic University of Gaza’s biology department.

He added: “Its prices are low and satisfies a large segment of the population of the Gaza Strip as they live in difficult economic conditions.”

Abd Rabbo told Al Jazeera the small birds breed in Europe in the summer then migrate in the autumn to Africa and Asia.

They are proving to be a vital food source in the enclave where more than 68 percent of households, or about 1.3 million people, are severely or moderately food insecure, according to the UN Office for the Coordination of Humanitarian Affairs, OCHA.

By 2017, the PCBS reported that the poverty rate in Gaza had reached nearly 60 percent with severe poverty at more than 42 percent.

You get the idea.

But it’s even worse than you think. You see, this whole “poor Gazans resorting to quail” story has been done before – in 2015! So much for Al Jizz’s claim that people are finding “creative new ways” to earn a living in Gaza.