Fauxtography of the Day: The Sheikh Jarrah Eviction Mockers

A number of Arab families in the Sheikh Jarrah neighborhood of Jerusalem are being evicted from their homes after an Israeli court ruled that the homes had belonged to Jewish families before 1948. And the haters have launched an online campaign in response.

As part of this campaign, they are sharing the following photo and captions: 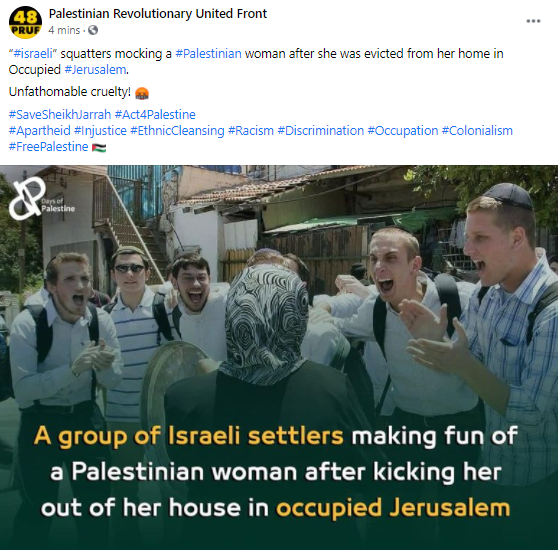 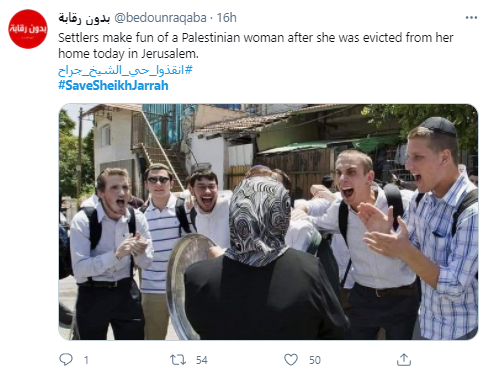 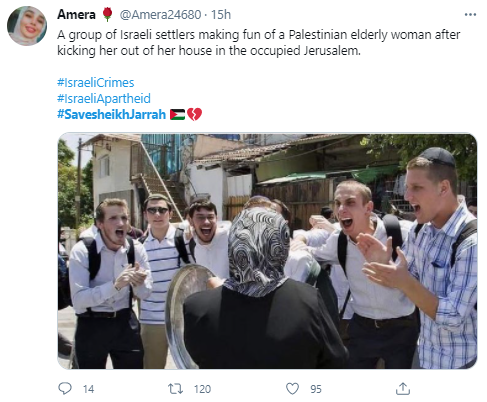 The captions, including hashtag, clearly suggest this is a photo of Jewish settlers mocking a palestinian woman just evicted from Sheikh Jarrah. Note how the last one includes the fact that she is an “elderly” woman, for increased dramatic effect.

You won’t be surprised to hear that this is once again an example of palestinian fauxtography, the phenomenon of trying to pass off a photo from a different time, place or entire context.

The photo is from 2010, and was published with the caption

A Palestinian woman whose house has been occupied by Jewish settlers arguing with Israelis who came to celebrate Jerusalem Day in front of her disputed house in East Jerusalem, May 2010.Credit: AFP

According to this 2012 report:

HolesintheNet, an Israeli website devoted to online world, published the story behind the picture Thursday, based on an explanation posted by a Reddit user. Several Arab families were expelled from homes in the Sheikh Jarrah neighborhood after the High Court found, in 2009, that the homes belonged to Jewish families and the Arabs were illegal squatters.

The Reddit user said that he spoke to one of the young men in the photo. The young man told him:

“This is false propaganda. This is a case of a good photographer who documented our faces, mostly mine, at the right second. As we sang and celebrated in Sheikh Jarrah, the Arab woman came out of a house, banging on a pan, and tried to disturb our celebrations, so we raised our voices and sang louder as she came nearer. We did not yell at her or mock her. We simply tried to keep on celebrating and she tried to disturb us. The picture does not show several other women who banged on pots and tried to interfere with our celebrations.”

In other words, not only is this photo not from this week, but it does not even show Israelis mocking a woman who was evicted.

And I do find this explanation to be credible; it wouldn’t be the first time a photographer documented faces at exactly the right second, in order to create a misleading narrative.

Having said this, I do oppose those who on Jerusalem Day go in to these neighborhoods and sing. I find it unnecessary and provocative. And I am not alone. From the above cited report:

As reported in Arutz Sheva at the time, FlagDance marchers in 2010 received specific instructions to avoid confrontations with Arabs. Rabbi Yaakov Meidan, head of the Har Etzion Hesder Yeshiva, wrote an article for youth before the celebrations on avoiding incidents in the Hebrew Makor Rishon newspaper.

Nevertheless, the haters’ use of this photo to portray something it isn’t – in order to once again demonize Jewish Israelis – is truly reprehensible.