We like to think that the impact of modern media is something new- but it isn’t. When Hitler became leader of the Nazi Party a hundred years ago in 1921, it was because of what he said and how he said it. While social media didn’t exist in his day, there existed an infrastructure where messages could be easily amplified: the beer halls, cafés and other venues of Central Europe were where people gathered regularly to exchange ideas and launch revolutions. While we like to focus on the benefits of such amplification, such as bringing people together, it also has the opposite and devastating effects when appropriated by those who want to justify their evil.

It’s hard to spend any time on Twitter, Facebook, YouTube and TikTok over the past week without seeing accusations of Israel being an Apartheid state. The legitimacy of this accusation aside, I’m seeing it used at the main justification for the Palestinian aerial bombardment of Israel by militants in Gaza. Let me make this clear: the likes of Ilhan Omar, Erdogan, AOC, Rashida Tlaib and other critics of Israel always highlight the accusation that Israel is an apartheid state and is therefore responsible for – if not deserving of – the current wave of violence against its civilians.

This is a direct consequence of groups such as B’Tselem and Human Rights Watch abusing their authority in leveling such heavy accusations at Israel over the past few months and with complete disregard for the consequences.

For example, Ismail Haniyyeh, the millionaire leader of Hamas, maintains a Twitter account (!?!) where he spews his hate and fuels the conflict inside and outside of Israel. In his tweet from May 11, he justifies the launching of seven rockets at Jerusalem while full of innocent civilians peacefully celebrating Jerusalem Day:

Now look at HRW’s Executive Director Ken Roth’s tweet from the day before, where he selectively highlighted passages from a WAPOST articles: 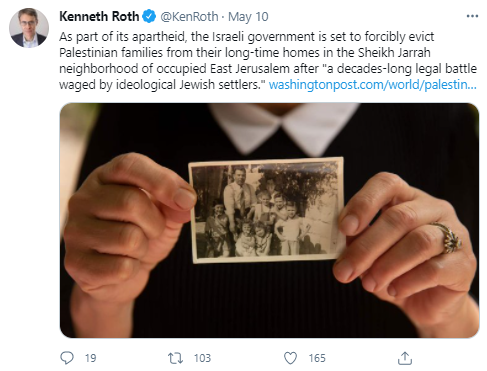 Again, we see the same language:

Also from HRW, Israel and Palestine Director Omar Shakir has spent the past month, if not his entire academic and professional career, amplifying the same vilifications of Israel in multiple tweets and retweets: 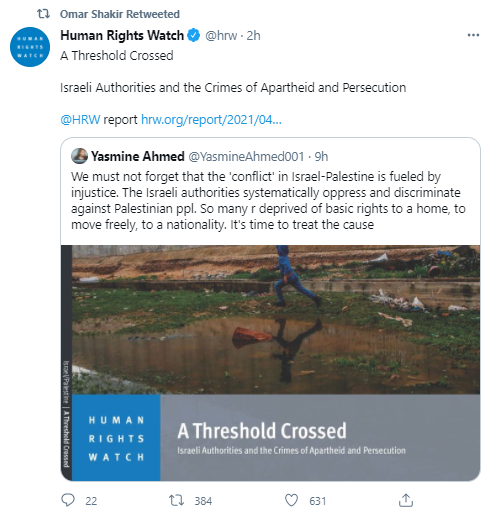 But enough is enough. When a terrorist leader is using your words to justify a genocidal war against an entire nation, you have to stop and wonder if you’re at least partly responsible for what’s happening, including all the death and suffering.

Israel isn’t perfect but it’s a beautiful work in process. And the consequences of the increasingly aggressive accusations by supposed “human rights” organizations has emboldened Hamas, helping spark a new war between Israel and the Palestinians that is currently holding them hostage to terrorism. Even worse, it’s tearing Israel apart with communal violence that is setting inter communal relations in Israel backwards almost 50 years, if not a century.

Omar Shakir, Ken Roth and Hagai El-Ad: All the pain and suffering we’re now seeing in Gaza and Israel are a consequence of the words you intentionally chose, in order to escalate your campaign against Israel. Your words are being recycled and amplified online and in the streets to justify the actions of Palestinian terrorists as they wage war against Israel.