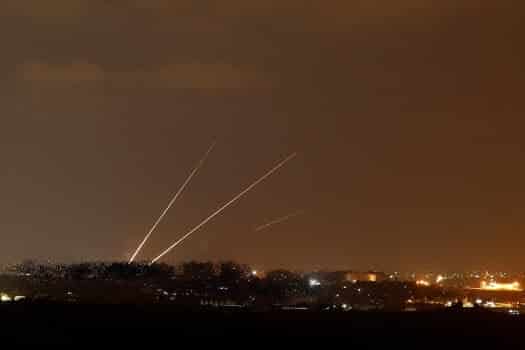 Here we go again was what I thought when the rockets started raining down on Israel from Gaza, accompanied by the usual rhetoric about Al-Aksa being in danger and Jerusalem needing to be saved. Here we go again, I thought, when Israel started to retaliate, claiming this time she will dictate the end of her military response as Hamas dictated the initiation of hostilities. Here we go again, I yawned to myself, as western democracies opined about Israel’s right to self-defence, quickly followed by lamentations about the killing of civilians, especially children, in Gaza and urging both sides to de-escalate. I have seen this play before, I told myself, and it will be as bad as all the previous ones. I shall be moved when I see something different, some change in this rerun that will startle me out of my seat.

Nothing of course changed, but I did get upset, nonetheless, because there were two new wrinkles. For one, Israeli Arabs rioted, attacked and murdered Jews, smashed and looted synagogues, daring to reveal their true feelings about the Jewish state. For two, throughout the western world people rallied in support of the so-called Palestinian cause, brazenly attacking Jews and demonizing Israel, and this in both the streets and parliaments of their nations, encouraged by elites whose tepid, bland and equivocating responses were enough to send shivers down my spine. It is 1920s and 1930s Germany all over again, I said to myself. Time to leave. Time for the Jews to leave and go to the country they now have, even if there too the lessons of the past have not been learned. Time to leave the goyim to their own devices, including their self-destruction. For if we are to go up in flames again, best to do it in our homeland and take our enemies down with us.

Readers will think I am over-reacting. Such readers should think again. The past when unaddressed has a way of returning with a vengeance, even if the guise it takes seems like a farce. And since the cultural elites of the western world seem determined to suppress their past and rewrite it to suit their own self-serving and moralistic interests of the present, the future looms foreboding. But as even understandable outrage can blind one to what is going on – and every day brought more news to fuel my outrage – I thought it prudent to reread the works of Elie Kedourie, that great sage of the Muslim Middle East and the mess the British made of it, to remind me how a cool and sober mind owner of an elegant literary pen thought about this situation that has only got worse with time. In my desk drawer I had photocopies of some of the essays that had appeared in two of his books: The Chatham House Version and other Middle-Eastern Studies, and Islam in the Modern World and other studies. I pulled them out and reread them to my great delight.

Dispassionate and marvellously written, these essays reminded me how ignorant the people who run the foreign policy of the western democracies are, raising once again the interesting question: does ignorance lead to moral turpitude or does the latter induce the former? My tendency runs to favouring the first, but such are the times that the rampant psychopathology of our current culture has made the question moot. The one defect inflames the other such that it is completely understandable why educators from kindergarten through post-graduate studies are heavily invested in falsifying history and indoctrinating the young in the dogmas of cancel culture and critical race theory. As usual, the Jews are the first to pay the price, but the rest will soon find out that their societies are going down the tubes as well.

Mr. Kedourie, in reviewing British policy in the Middle East between the two world wars, makes clear how wrong they were about everything. British policy-makers confused ethical theory with foreign policy, saw Muslim Arab moderates where there were only extremists, turned ignorant and traditional Arab Muslim masses into captives of their gangster leaders rather than budding citizens who could begin to fathom and respect the rule of law. Mandate Palestine’s dealings with Haj Amin al-Husseini were harbingers of President Biden and the US State Department’s handling of the PLO, both in its Fatah and Hamas variants. Secretary of State Blinken’s postulated aim of funneling money and humanitarian aid to Gaza without its reaching Hamas coffers in order to help Gaza rebuild after it started another war against Israel is an outright joke. As is his claim that Israel’s enforcing the law in Sheikh Jarrah or on the Temple Mount would be responsible for yet another war. On the contrary, failure to do so will only reinforce among even the Israeli Arabs that blackmail always works while the rent-a-crowd mentality decried by Mr. Kedourie is still alive and well. Has no one in the State Department and its Arab or Middle Eastern desk ever read any of Mr. Kedourie’s works? What did their officers learn at all those Ivy League schools other than moralistic and ideological cant? It is depressing indeed to read and to see how blatantly stupid are the people running western foreign policy when it comes to Israel and its Arab Muslim neighborhood.

Israel has the right to defend itself, our leaders piously proclaim, as if Israel needs their imprimatur. Do they say that about Trinidad? Bangladesh? Canada? Israel should not plan on military victory because there are too many civilian casualties, they immediately add. Is that what they teach at West Point, Sandhurst, the Royal Canadian Military College? Heaven protect us if they do. Is that how the western democracies defeated Nazi Germany? But surely, people would say, one cannot compare the Palestinians to Nazis. Oh no? There is a direct line running from the Grand Mufti’s genocidal program against the Jews and the Zionist project to Hamas’ overt claims to liquidate Israel and its citizens. There is also a direct line running from the massive popular support given to Haj Amin al-Husseini in the years before the rise of the Jewish state and the equally massive support to Hamas, seen in the crazed funeral processions of Gaza, which now extends to the Arab Muslim population in the areas still controlled by the so-called Palestinian Authority. Indeed, the recent round of riots and rocket attacks was endorsed by Abbas and his henchmen to deflect attention away from the cancelled elections in said Authority which would have been won by Hamas. So where are the elusive Palestinian moderates the West is so eager to work with and claims to know? The answer is: nowhere to be found.

This recognition ought to be the starting point for any intelligent policy towards the conundrum Israel faces in the Middle East. Western democracies should stand steadfastly by Israel’s side and call the Palestinians to account. If you start a war, they should say, an immoral war to boot, you shall pay the consequences. Why should western democracies help Gaza, run by Hamas, to rebuild only to have Hamas launch more rocket attacks in the future? Hamas has already promised it is preparing for the next round. What about insanity being defined as repeating past behavior in the hope things will turn out differently this time? Why should western democracies continue to support a two-state solution when it is manifestly clear it has no chance of coming into being? Not only do all Palestinian factions, not to mention the wider Arab Muslim world, make clear their goal is the liquidation of the Zionists and their state; the Israelis themselves would have to be crazy to allow such a state, whose existence would be tantamount to national suicide, on their borders. But the British never made it clear to the Arabs they controlled and tried to manipulate, only to be manipulated in turn, that only the creation of modern nation-states and respect for the rule of law strictly enforced will lead to some fruitful partnership. Instead, the British twisted the reality of a kinship-based society mired in the self-destructive political and religious ideology of Islam into an Alice-in-Wonderland delusion of incipient Westminster liberalism that would happen, so they thought, if only the British proved, through concession upon concession to the most extreme Arab demands, that they and the Arab Muslim societies they ruled were friends. The British policy failed totally everywhere but in the chancelleries of the western democracies, where the shibboleths of that policy have been taken over and become encrusted in the idiotic mantras that issue forth from western governments and get transmitted in the media. One lamentable case in point among so many others: the French foreign minister lectured Israel a few days ago on the dangers of its drift toward an apartheid state because it dared not commit national suicide. But then the European Union, of which France is a leading member, has been one of the chief financiers and enablers of the murderous Palestinian Authority, overlooking all its abuses against its own people, let alone its lies, duplicity and terror attacks against Israelis.