As has already been posted, Israel banned congresswomen Rashida Tlaib and Ilhan Omar from Israel – the rationale is because they planned on using their trip to strengthen the boycott against us and deny Israel’s legitimacy. Whether or not you agree with the decision, Israeli Prime Minister Binyamin Netanyahu made this very clear.

But this matters little to the haters like antisemite Linda Sarsour, who is yet again trying to exploit the situation to stoke the flames of hatred by claiming our decision was motivated by anti-Muslim/palestinian bigotry: 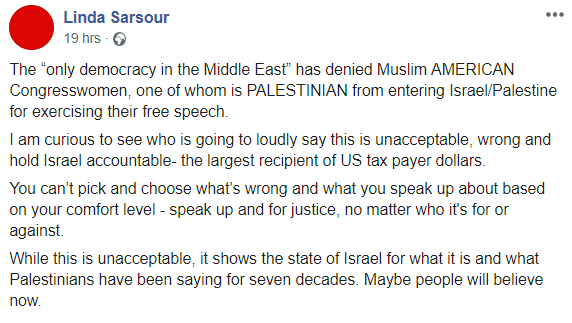 Make no mistake about it. Gaslighter-in-chief Sarsour knows this is a lie; the Israeli PM had published his post before hers, and when the trip was announced, there was much talk as to whether would ban them pursuant to Amendment No. 27 to the Entry Into Israel Law, which “prohibits the entry into Israel of any foreigner who makes a “public call for boycotting Israel” or “any area under its control.” Besides, the law has already been invoked in the past to ban Jewish BDS-holes like Ariel Gold.

I know there is tendency these days to misuse the word “evil” to describe someone who you vehemently oppose. I pride myself on not falling in to the trap, and reserve it for those I truly believe deserve this descriptor.

Update: Israel is now allowing Tlaib to enter Israel on humanitarian grounds if she vows to respect ‘any restrictions,’ and refrain from promoting a boycott during her stay. 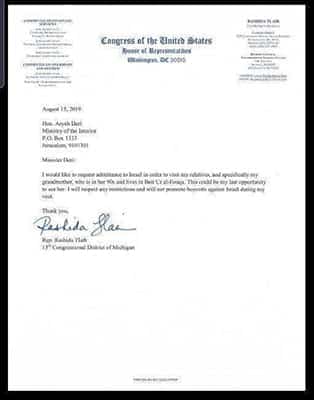 I am sure Sarsour won’t be acknowledging this.