Yesterday, a palestinian Arab man was shot and killed by Israeli forces during an alleged car-ramming attempt at a checkpoint.

The palestinians and Israel-haters are claiming he was executed in cold blood.

Not because they were at the time, but because it was his sister’s wedding, so surely he was just rushing through the checkpoint to bring his mother and sister from a beauty salon.

Yes, really. That is their proof. 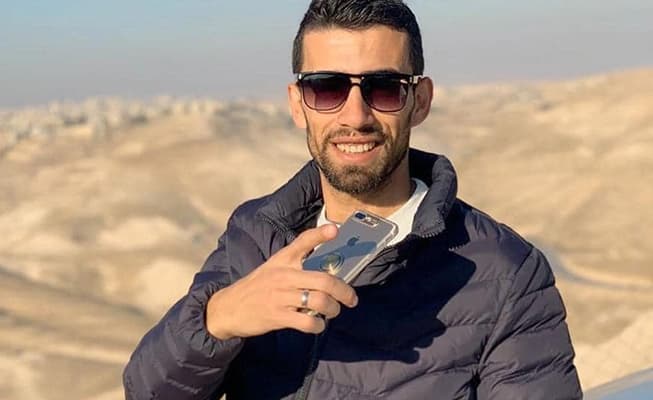 Suspected car-ramming terrorist Ahmad Erekat. The oppression made him do it

The IDF claims he was speeding when he arrived at the checkpoint, not stopping when flagged to by a female officer, instead veering towards her and slamming into the checkpoint tower. He subsequently got out of the vehicle and advanced toward forces, who opened fire and killed him.

Among those making the allegation of a cold-blooded execution is none other than Saeb Erekat, the boy who has constantly cried wolf and executed the truth in cold blood.

Senior Palestinian official Saeb Erekat said his cousin, Ahmad Moustafa Erakat, was only rushing when Border Police shot him dead at the “Container” checkpoint in the neighborhood of Abu Dis, north of Bethlehem.

“Israeli soldiers shot dead Ahmad Erekat from Abu Dis, east of Jerusalem, on his sister’s wedding day,” PLO executive committee secretary general Erekat’s office said in a statement. “Ahmad was rushing through a checkpoint to bring his mother and sister from a beauty salon in Bethlehem.”

“My cousin, the nephew of my wife, was executed, murdered in cold blood and Netanyahu bears responsibility,” Erekat was separately quoted as having told the Kan public broadcaster.

Erekat called his cousin a “peacemaker” and said that “instead of having a wedding, we put away the flower arrangements and chairs and set up a mourning tent instead.”

According to Border Police, the younger Erekat was speeding when he arrived at a checkpoint at the entrance of Abu Dis. When an officer flagged him to halt, the driver veered toward her and slammed into the checkpoint tower. He subsequently got out of the vehicle and advanced toward forces who opened fire and killed him.

“It’s possible that the car slid a bit because of the speed. Ahmad was so excited for his sister on her wedding day, and preparing for his own wedding in early July,” Emad Erekat, Ahmad’s cousin, told Ma’an News Agency.

Note how Erekat admits Ahmad was “rushing through a checkpoint” and concedes the car may have veered towards the soldier (even though he was not there). That is because he is fully aware of the fact that there have been many car ramming attacks, the number of which, when added to the fact his cousin did not stop and veered towards the soldier, creates the assumption of an attack, and makes his mobilization absolutely necessary. So even if it turns out this was not an attack, this was not a cold-blooded execution.

Also joining the bandwagon is antisemite Linda Sarsour, fresh from organizing a “no Zionists allowed” rally. 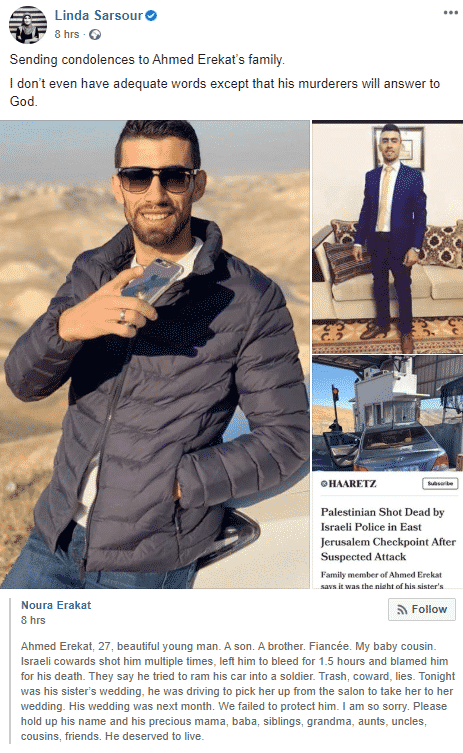 No Linda. You, Saeb and others inciting against Israel and Jews who support her are the ones who will answer to G-d.

“And I will bless those who bless you, and the one who curses you I will curse, and all the families of the earth shall be blessed in you.” (Genesis 12:3)

Update: Here’s the footage of the attack.

Border Police footage of Ahmad Erekat's vehicle plowing into an Israeli officer at a checkpoint outside Abu Dis yesterday before he got out of the car and was shot by other cops at the scene pic.twitter.com/6jZLgeDljb

And how does Saeb explain the footage? 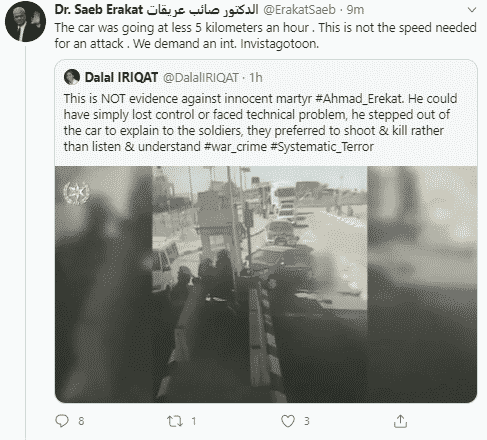 The same Saeb I quoted above as claiming

“Ahmad was rushing through a checkpoint to bring his mother and sister from a beauty salon in Bethlehem.”

Rushing at 5km an hr?

“It’s possible that the car slid a bit because of the speed.”

Meanwhile, look who else spread the libel

Update: According to Ynet (Hebrew), Ahmed claimed in a video that he “never betrayed the nation,” probably because he was suspected of cooperating with Israel. Which would explain why he committed the terror attack.