As I have posted about the past week, anti-Israel DouchebloggerTM Richard Silverstein has created fake news with his posts alleging Israel bombed Beirut. I showed how he claims he was told by a reliable anonymous source (hardly proof, not to mention his terrible track record with such sources), cherry picked different statements by officials and the like, and even contradicted himself.

Now it seems as though Facebook fact-checkers agree with me – and Silverstein is livid. 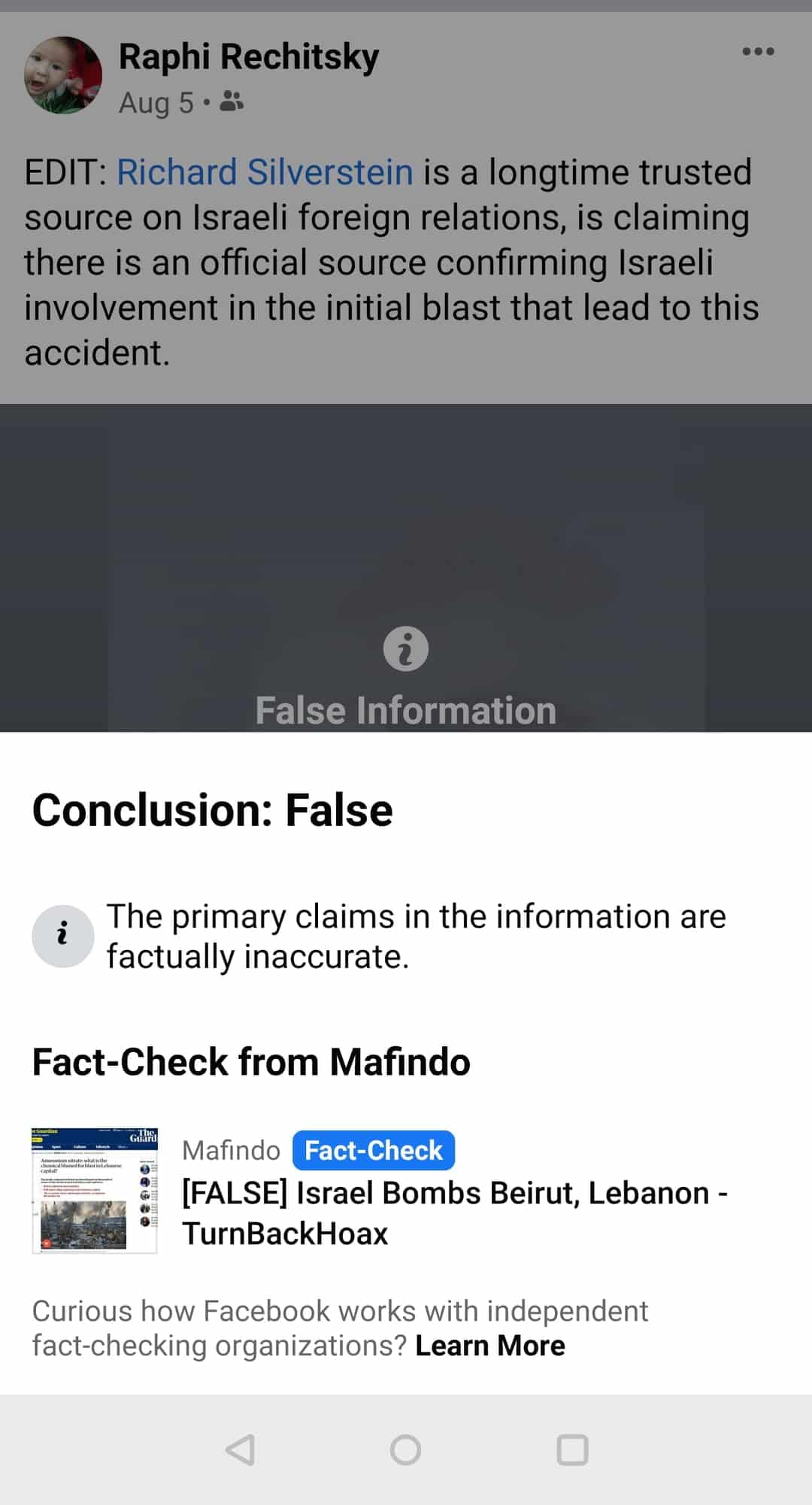 Facebook’s right-wing fact-checkers have struck again.  But this time the Daily Caller isn’t the culprit.  It’s an obscure Indonesian “anti-hoax” outfit called Mafindo, one of whose researchers published a post on its website declaring my reporting about Israel’s role in the Beirut disaster to be “false.”  As a result, my own post and any other Facebook user who republishes it are covered by a screen preventing access to the content.  The screen decrees the report has been labeled false, but offers no support for the decision.

I managed to locate the researcher, Aribowo Sasmito‘s post justifying his decision, and it is filled with shoddy, vaguely substantiated claims.  Among them:

Israel did not bomb Beirut, Lebanon. So far it is known that the explosion in Beirut was caused by a chemical reaction of ammonium nitrate, as stated by the President of Lebanon, Michel Aoun.

In fact, Pres. Aoun’s statements about the Beirut tragedy changed from his first one to later statements he made which conceded a “foreign actor” may have caused the incident.

Once again, Silverstein cannot get his facts right. That is not what Aoun said.

“There are two possible scenarios for what happened: it was either negligence or foreign interference through a missile or bomb,” he said, the first time a top Lebanese official raised the possibility that the port had been attacked.

It may seem like his words carry similar meaning, but the fact Silverstein invented his own wording for Aoun speaks volumes about his lack of care and accuracy.

In a separate posting justifying the labeling of Ronnie Barkan’s reposting of my report as a hoax, he writes:

From the search results, the claim that Israel bombed Beirut, Lebanon on 04/8/2020 is false. Israel itself has dismissed the prejudices of the bombers in Beirut, Lebanon. “Israel has nothing to do with the incident,” said the official, who asked not to be named, as reported by Reuters.com, Wednesday (05/08/2020).

In addition, according to TheGuardian.com report, the Prime Minister of Lebanon, Hassan Diab said 2,700 tonnes of ammonium nitrate was the cause of the explosion due to negligence of storage in an unsafe warehouse for 6 years. This was also confirmed by the President of Lebanon, Michel Aoun in the BBC.com news.

So far there has been no official information regarding Israel’s allegation of being behind the explosion in Beirut, Lebanon. President Aoun promised to conduct a transparent investigation into the blast incident in Beirut.

“With determination we will carry out an investigation and reveal the circumstances surrounding what happened as soon as possible and arrest whoever was responsible and whoever was negligent and sentenced them to the harshest punishment,” Aoun told bcc.com reporter Wednesday (07/08/2020) after a visit to a ruined port.

From the search above, the claims that Israel bombed Beirut, Lebanon are included in Misleading Content. This is because there are no facts about Israel’s involvement in the Beirut explosion.

This is a correct adjudication. There are no facts about Israel’s involvement, only Silverstein’s claims which he tries to pass off as facts.

But Silverstein can’t handle the truth.

Using the denial of an Israeli official of the country’s involvement in the attack as a basis for determining the truth, is ludicrous.  This blog alone has recounted scores of such statements by government officials which were lies, including this one about Beirut.

The claim that the prime minister declared the tragedy the result of an explosion of ammonium nitrate is only half-true.  Multiple sources and media outlets have correctly noted that the main blast did not happen spontaneously, but rather through an initial explosion.  My own Israeli sources says that was due to an Israeli attack on a Hezbollah arms warehouse near the fertilizer storage facility.

Finally, the claim that there are “no facts” about Israel’s involvement in the Beirut explosion is based on ignorance of media reporting on this story.  As I’ve noted here, Asia Times published its own report based on Lebanese intelligence sources naming Israel as a likely culprit.  This story also confirmed that there were two explosions (not one) and that the first was likely the detonation of military munitions stored in the port by Hezbollah.

Note how he declares “Using the denial of an Israeli official of the country’s involvement in the attack as a basis for determining the truth, is ludicrous”, yet thinks what an anonymous source and enemies of Israel declare as truth is sufficient as a basis for determining the truth! And even then, the enemies of Israel did not state unequivocally that Israel did it, but rather we were the “likely culprit.”

The concept of innocent until proven guilty applies. Silverstein has not proven anything, so there is a presumption of innocence. His post stating that Israel certainly bombed Beirut is unadulterated fake news.

Returning to Mafindo, how does a lone researcher based in Indonesia determine a story about Lebanon is false?  Does he know anything about Israel or Lebanon?  Does he consult sources familiar with these countries?  Does he have any personal expertise on the subject of the story itself?  No to all these questions.  He sits somewhere in Indonesia and makes a cursory check of a few foreign news outlets, doesn’t read the original report I wrote, and determines by fiat that my work is false.  It’s an outrage.

Facebook claims that its fact-checkers have been approved by an independent program run by the Poynter Institute.  However, it appears that Poynter, which generally has a good reputation for probity and transparency is woefully misguided in crediting Mafindo as a credible judge of fact and fiction in news.

In fact, the Poynter site declares:

“Mafindo is registered as an organization with one main aim to fight dissemination of hoax in Indonesia.

I could possibly credit it as an authority on matters concerning Indonesia.  But as an authority on Israeli national security issues? Hardly.  This, in turn points out a fundamental flaw in both Poynter’s system of credentialing these organizations and Facebook’s reliance on both Poynter and the fact-checkers themselves as authorities.  How does Poynter determine that an organization specializing in hoaxes in Indonesia is competent to expose hoaxes in international news reporting?  How does it determine that Mafindo has the expertise and research capacity to do this?

Oh the irony! Here we have a guy sitting in Seattle who claims to be an expert on Israel and what happened in Lebanon whining that a fact-checker sitting in Indonesia cannot possibly know anything about Israel and Lebanon. What’s good for the goose is good for the gander shanda.

And how can he state that the fact-checker didn’t read the original report he wrote? What indication is there that they didn’t?

Silverstein is not yet done; he then claims his “legitimate journalism and truth” is being suppressed by the right-wing.

Returning to Joel Kaplan, he has devised a rather clever way of inserting right-wing bias into the fact-checking program.  He appoints right-wing outlets into the program so that neither he nor Facebook itself has to be blamed for censoring progressive content.  The company can shift blame from itself to the independent sources who make the determination (indeed, there is no opportunity to complain directly to Facebook about such decisions).  If the third-party itself has a bias that motivates its decisions, that’s of little concern to Facebook: it can turn to Poynter and say that its sterling reputation shields it from any blame.

The outcome of this is that progressive news sources are smeared with false claims and our reporting is denigrated unfairly.  This is censorship in the guise of protecting media integrity and upholding truth.  In this case, it does precisely the opposite: it suppresses legitimate journalism and the truth.

Face facts, Dicky. Your posts are not journalism. They are the libelous smears of a failed blogger and human being.