That sound you hear is of me licking my chops. 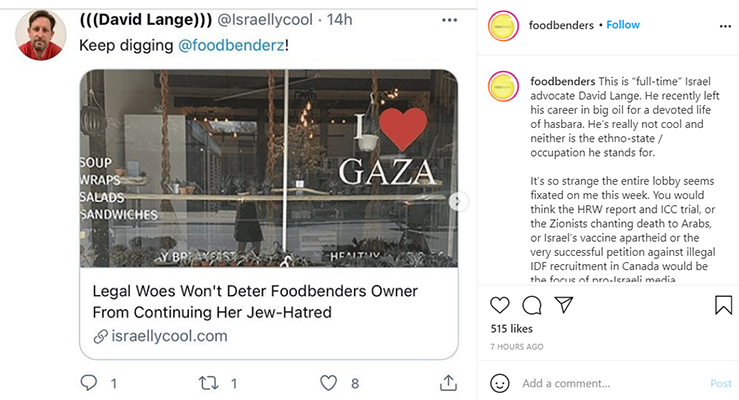 This is “full-time” Israel advocate David Lange. He recently left his career in big oil for a devoted life of hasbara. He’s really not cool and neither is the ethno-state / occupation he stands for.

It’s so strange the entire lobby seems fixated on me this week. You would think the HRW report and ICC trial, or the Zionists chanting death to Arabs, or Israel’s vaccine apartheid or the very successful petition against illegal IDF recruitment in Canada would be the focus of pro-Israeli media.

But no, as usual it’s all about Foodbenders. What a weird hill to die on.

Allow me to respond – even though her response has about as much substance as one of her breakfast wraps.

Firstly, the use of inverted commas around “full time” is rather odd. I am a full time advocate now.* Here is a more appropriate use of that phrase: “Full time” sandwich shop owner Kimberly Hawkins seems to spend every waking hour railing against the world’s only Jewish state and those who support it.

I did not just leave my career in the oil industry. That happened almost 21 years ago when I was still living in Australia. I had been working in hitech my entire life in Israel following my aliyah. But of course, then Hawkins would not be able to start off by painting me as a “big oil” bad guy. But don’t worry, Kimberly, I am sure Roger would be proud of you (for more reasons than one).

I am entirely fine with Hawkins labelling me not cool, although let’s face it, as a Jew-hating tofu sandwich lover with a propensity for saying “F**** the police” , she probably isn’t the best judge of what’s cool and what isn’t.

As for the insinuation that my focus is on her and not things like “the HRW report”, or “the Zionists chanting death to Arabs”, her delusions of grandeur are almost at the same level as her antisemitism. I covered both those topics. Regarding the second, I was very firm in condemning those chants (which were made by a small group of frustrated extremists; almost all “Zionist” Jews also oppose such behavior). Funny, but I do not recall hearing a peep out of Hawkins regarding the numerous unprovoked, antisemitic assaults of Jewish Israelis that precipitated these chants.

So no, it is not “all about Foodbenders.” Not even close. Fighting the antisemitism of you and other Jew-haters, though, is not a weird hill to die on, especially given how many of my father’s family were murdered because of such antisemitism. Demonizing the world’s only Jewish state and those Jews who live there and those who support her, though, is a weird hill to die on, especially for someone trying to paint themselves as caring about human rights.

*if you want to support my efforts as such, you can contribute here