Institutionalized Gaslighting of the World’s Most Bullied Population

“Israel will exist and will continue to exist until Islam will obliterate it, just as it obliterated others before it.”

To gain international support, Hamas recently did a makeover to their 1988 covenant, from where that quote was pulled. Yet, the Islamic terror group has not changed their methods or their goal, which is nothing short of genocide against the Jewish people. The Hamas charter demonizes the Jews by comparing us to Nazis. It urges Muslim scientists, teachers and media to take part in instilling hatred against Jews, with a focus on the world’s largest Jewish community – Israel. And nowadays, Hamas, who abuses and oppresses their own people, benefits from the perks of having much of the Western and liberal world, including a sizable number of Jewish people, mobilize to forward their goals. 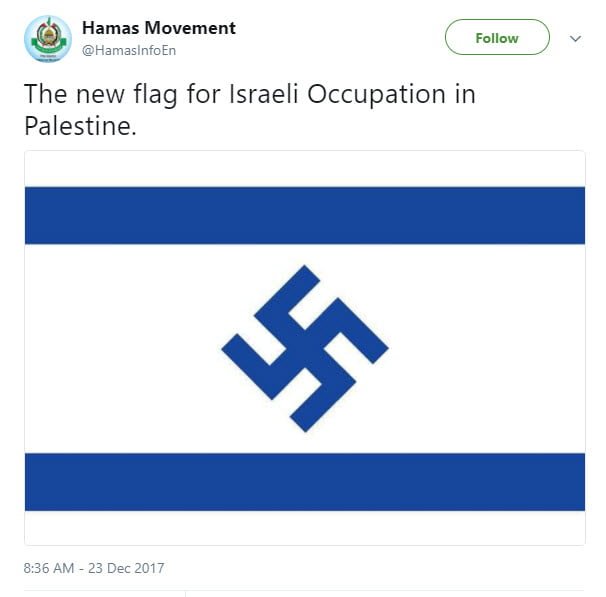 More than a decade before Jerusalem’s Grand Mufti Mohammed Haj Amin al-Husseini visited Germany in 1941, to collaborate with Adolf Hitler and other Nazi members, he instigated Arab riots against the Jews, including the Hebron Massacre of 1929, that annihilated the descendants of that ancient Jewish community. It would seem ironic, then, that extremist Muslims and some of their enablers in the West would ever refer to Israelis and their supporters as Nazis. But it isn’t ironic. It’s racial gaslighting. That is, those people who vocalize denial that Jews are being discriminated against, are often the same people who, in word or deed, seek to deprive the Jewish people of security and legitimacy in their one sovereign country.

This ongoing smearing that weakens the image and distorts the reality of the only Jewish state in the world, has also been endangering Jews throughout the globe. This month, anti-Jewish thugs beat an elderly man in Toronto. They also paraded in masses in European cities threatening that Islam’s violent army will conquer Jews. And they drove through the streets of London calling on their supporters to rape Jewish women. When taking into account that small sample of a much larger trend, no one should be surprised that neo-Nazis have been showing up to these events with symbols of support.

And much of the world has participated in this racial gaslighting in varying degrees, either deliberately, or as unwitting vehicles as they pass on lies or half-truths, with relevant omissions, that imply or insist that Jews are not unfairly discriminated against. That, while foreign governments and Islamic terror groups literally call for the extermination of the Israeli people.

Israel is the only country whose enemies, like Hamas and Palestinian Islamic Jihad (PIJ), are indirectly supported by people who claim to be liberal, while, paradoxically, those terror entities adhere to the antithesis of liberal values. Israel is not a perfect country, and Jews are not a perfect people, but Israel is the most lied about country, and Jews are the most lied about people.

Last month, reports entered the mainstream that extremist Jews gathered in the streets of Jerusalem and shouted, “Death to Arabs.” Some of those “protests” turned violent. That indeed happened and those actions horrified the vast majority of Israelis, who condemned them. Not so widely reported was that Israeli police arrested several of the perpetrators. But what has been omitted or buried, if mentioned at all in articles about that violence, is that it was an unacceptable response to a harassment campaign leading up to it, in which Arabs had been targeting religious Jews for humiliation, filming the abuse, and then uploading the videos on TikTok.

And in a week in which an Islamic terror attack killed 232 people, including 85 schoolgirls, in Afghanistan, the world was more focused on a land dispute case in Israel, that has been grossly mischaracterized by politicians and media. Israel has a court system that functions distinctly from the Knesset, and consequently, often undermines the will of Israeli politicians. It is part of Israel’s checks and balances. A couple years ago, an Israeli court ruled in favor of Palestinians in a land dispute against Jews, and so Israel enforced an eviction of the Jews, without the world noticing. But this time, under different circumstances, the court ruled in favor of Jewish landowners against the Palestinians whose lease had expired and who, for decades, refused to pay rent. One resident confessed that the “. . . Palestinian Authority pressured us not to pay rent because we would have recognized Jewish ownership.” Their fear is not unfounded. The Palestinian Authority has imprisoned for life Arabs who sell land to Jews. But too many Western politicians and much of the media, especially social media, distorted the private dispute, playing right into the hands of those who seek to delegitimize Israel – giving the illusion that the rights-giving, law enforcing state, is the antithesis of what it really is. Sure, there is room for nuanced discussion about any given law. But that isn’t what has been going. Instead, the world has enabled lawbreakers in Israel to act with impunity as people have proven themselves too ready to side with those who have a case against Jews, regardless the facts.

That Friday, May 7, at the end of Ramadan prayers in which tens of thousands of Muslim worshippers freely prayed at the Al-Aqsa Mosque, built on top of the ruins of the Jews’ holy Temple, many of them waved the flag of Hamas, that terror organization committed to the annihilation of the entire Jewish people. They also chanted for them to bomb Tel Aviv. Yet, mainstream media did not widely report how a sizeable group of Muslim worshippers stood on the holiest ground to Jews and called for an Islamic terror organization to bomb a major city in Israel (a city that has been among those under recent rocket attacks).

The next day, radicals from among the Muslim worshippers threw fireworks, rocks and bottles at law enforcement outside that mosque. And so, police went into the mosque to apprehend the perpetrators. But, media headlines, and some content, implied that Israelis stormed the mosque completely unprovoked. Most reports either omitted or buried those initial attacks. Despite those images, from that day, that suggested otherwise, Muslims pray regularly and peacefully throughout Israel and on the Temple Mount and did so on the last day of Ramadan this year. Whereas, Jews are prohibited from praying on the Temple Mount, per order of the Islamic Waqf who are guardians, courtesy of Israel’s generosity and pragmatism.

The next evening, Israelis celebrated Jerusalem Day, an annual holiday that marks the reclamation of the part of Jerusalem whose Jewish population was violently expelled by Jordan in 1948. Celebrants were already singing and dancing at the Western Wall (Kotel) when Muslims accidentally set fire to a tree on the Temple Mount, near Al-Aqsa Mosque, as they were shooting off fireworks. Images of the Jews dancing below, at the Kotel, spread through social media with captions accusing them of being hateful and cheering on the burning tree, despite that most probably didn’t even see it.

The media and social media campaigns are not only against Israel, but also against objective truth. And they are only part of this trend. Last month, the NGO Human Rights Watch (HRW) released a 200 plus page report that omits critical facts, including not a single mention of the terror that Palestinian Islamists have inflicted on the Israeli people who’ve lost limbs and loved ones to attacks in restaurants, buses a disco and on and on. It erroneously concluded that Israel is an apartheid state, despite being a country that extends equal rights to all citizens. Israel does have measures in place that inhibit Palestinians (non-Israeli citizens), from the disputed territories, from entering Israel freely. Those measures have saved lives. Human Rights Watch lost its way long ago; by downplaying the dangers of those who support terror, by accepting money from a Saudi billionaire to refrain from criticizing abuses against LGBT individuals and by funneling an abundance of resources into demonizing Israel. And this institutionalized antisemitism, not exclusive to HRW, harms more than just Jews. The United Nations consistently condemns Israel with resolutions whose numbers surpass those given to all other countries combined, essentially ignoring the victims of totalitarian governments. Recently, at least four democratic countries were among those who voted in favor to give Iran a spot on the UN’s Commission for Women’s Rights. This despite that the Iranian regime keeps innocent women in harsh prison conditions and call for the death to the United States and to Israel – countries that happen to also have women in them.

Last week, Hamas launched a rocket into Jerusalem and has since launched over 3000 more, including at Tel Aviv, per the chants of the aforementioned worshippers. Three thousand rockets intended to kill innocent people whose country is smaller than the island of Sicily. Hamas rockets have not only killed Arab and Jewish citizens of Israel and a woman from India, but they have also killed some of their own citizens, including children, from inadequate launches, that didn’t make it out of Gaza. If not for the Iron Dome, the damage and death toll would be unimaginable. The IDF takes measures to eliminate as much Hamas military infrastructure possible, with as little harm to the civilian population possible. Hamas, on the other hand, as a long-term strategy, has been cruelly placing rocket launchers in populated areas to simultaneously deter Israel from destroying them, but reaping the propaganda points by the civilian body count should Israel take out the weapons and people with them. A Hamas official recently called on his followers to use a $5 knife to slaughter Jews, while moving his hand to his neck to motion on himself how to do it.

Faith Quintero is the author of Loaded Blessings, a family saga that alternates between Inquisition era Spain and modern-day Israel. It’s among the Federalist’s top books of 2019 list and a Montaigne Medal finalist for the Eric Hoffer awards. The Montaigne Medal is an additional distinction, awarded to “the most thought-provoking books.” Follow Faith on Twitter @FaithQuintero7