We already knew the New York Times had turned into an antisemitic cesspool. But they have really “upped their game” these past weeks during Operation Guardians of the Walls.

For example: an article on the recent spate of antisemitism entitled Attacks on Jews Over Israel Are A Gift To The Right (title since changed), and this recent op-ed by palestinian Arab propagandist Diana Buttu, which is full of falsehoods including the infamous Map that Lies.

But this post is not about those two examples. It is about their latest: a heart-wrenching slideshow They Were Only Children, about the children who were killed during Operation Guardians of the Walls.

A quick read, and you may think it is quite even-handed; it mentions both Gazan and Israeli children victims. But a closer look reveals the same agenda we have come to expect from the modern-day New York Times.

It begins in dramatic fashion: 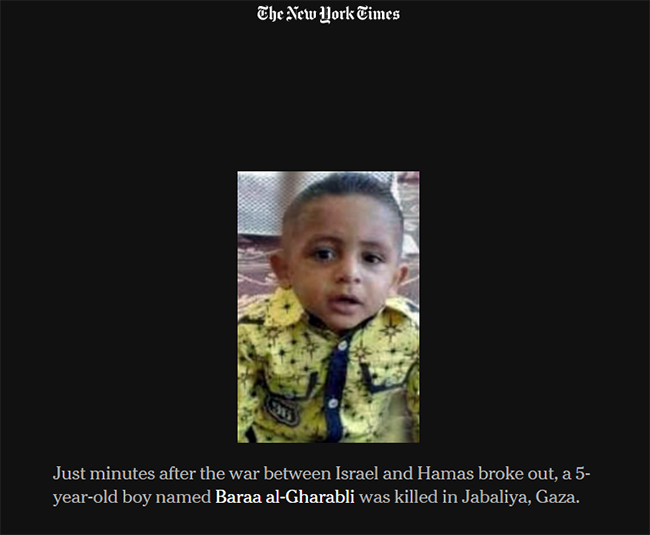 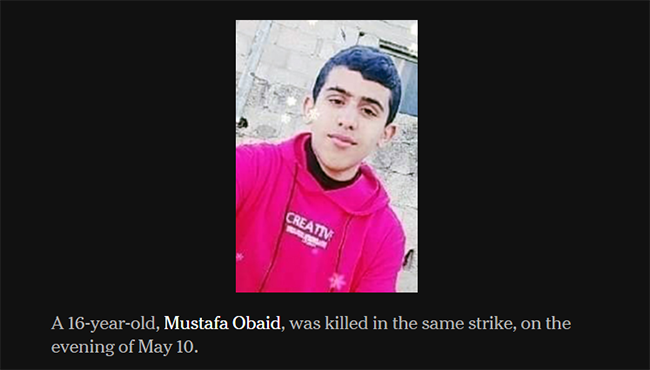 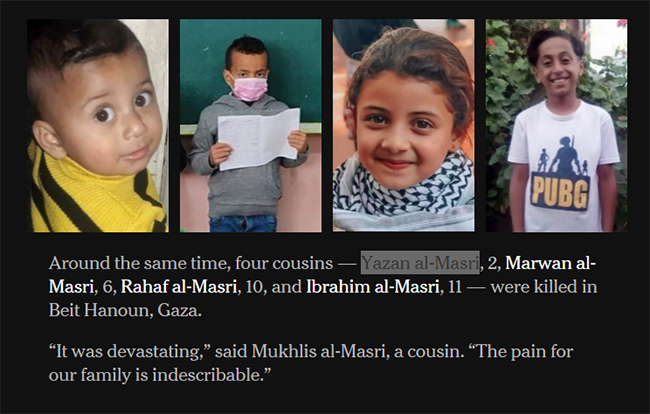 The slideshow title then appears in big letters, followed by a few more photos of Gazan children killed, and then this text:

Nearly all of the children killed were Palestinian.

Gaza is crowded and its population skews young, with about half under age 18. So when Israeli warplanes hit homes and residential neighborhoods, the number of children at risk is extraordinary. Sometimes nearly entire households disappear with a single blast.

Yet a few pages later, even the New York Times admits those first two children appearing in the slideshow were actually killed by Hamas rockets!

While most of the children were Palestinians killed by Israeli airstrikes, there are exceptions.

At least two of the children killed in Gaza — Baraa al-Gharabli and Mustafa Obaid — may have been killed when Palestinian militants fired a rocket at Israel that fell short, according to an initial investigation by Defense for Children International-Palestine.

What they don’t tell you is how the al-Masri children appearing also at the top of the slideshow were almost certainly killed by a Hamas rocket too.

As were these two children: 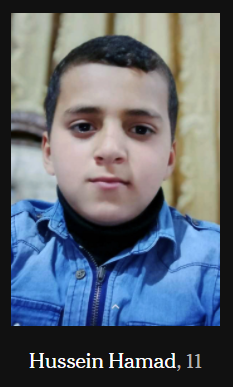 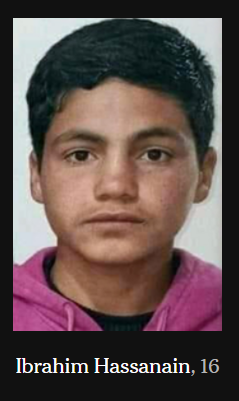 Yet somehow the New York Times either did not know or knew and did not mention this, despite claiming:

The identities of the children killed, their photographs and the circumstances of their deaths came from their parents and other relatives, teachers and schools in Gaza and Israel, international rights organizations, Palestinian officials, social media, and news organizations in Gaza and Israel. Most of the details were corroborated by multiple sources.

The New York Times goes on to explain how children in Gaza are at risk:

In Gaza, they grow up amid widespread poverty and high unemployment, and cannot freely travel in or out of the territory because of the blockade imposed by Israel and Egypt. They also live under the constant threat of war. An average 15-year-old would have lived through four major Israeli offensives. Nearly everyone in Gaza knows someone who has been killed in the fighting.

Later on, they do mention the lack of bomb shelters in Gaza, but in the context of pointing out the defensive capability imbalance between the two sides:

Hamas and other militant groups fired more than 4,000 rockets at Israeli towns and cities, also indiscriminately. But most were intercepted by Israel’s Iron Dome air defense system, which Israeli officials said stopped about 90 percent of the rockets. And many Israelis have safe rooms in their homes.

In Gaza, most people have no access to safe rooms or shelters. Many people seek refuge in the United Nations schools, but they too have been bombed, reinforcing a feeling that anyone could be killed anywhere.

Yet no mention of why there are no bomb shelters in Gaza: Hamas’ not investing in them, but rather using funds to build rockets and terror tunnels and other terrorist infrastructure.

Another example of the bias on display is this:

And one of the children killed in Israel, Nadine Awad, was Palestinian.

She was Arab-Israeli, not palestinian.

In other words, don’t be fooled! Although pretending to be even-handed, this slideshow is pretty much the same old shit from the paper that has turned to shit.