A few nights go, Israel faced off against Scotland in a UEFA Nations League game in Glasgow. And naturally the Israel-haters tried to make it all about the palestinian Arabs (Hat tip: Michal).

PRO-PALESTINE demonstrators have taken to Hampden Park to protest tonight’s Scotland versus Israel match at the stadium.

Despite the stadium remaining largely empty due to coronavirus restrictions, organisers called for supporters to join them outside Hampden this evening.

Banners reading “Don’t play Ball with Israeli Apartheid” and Palestinian flags were on display in a demonstration that went on from 6.30pm tonight.

The path of the Israeli football team’s bus has been painted blood red by activists in Glasgow ahead of tonight’s Nations League game against Scotland. pic.twitter.com/CTalnsvyTd

But the media reporting this have really dropped the ball. Here is another image from the anti-Israel pre-game protest: 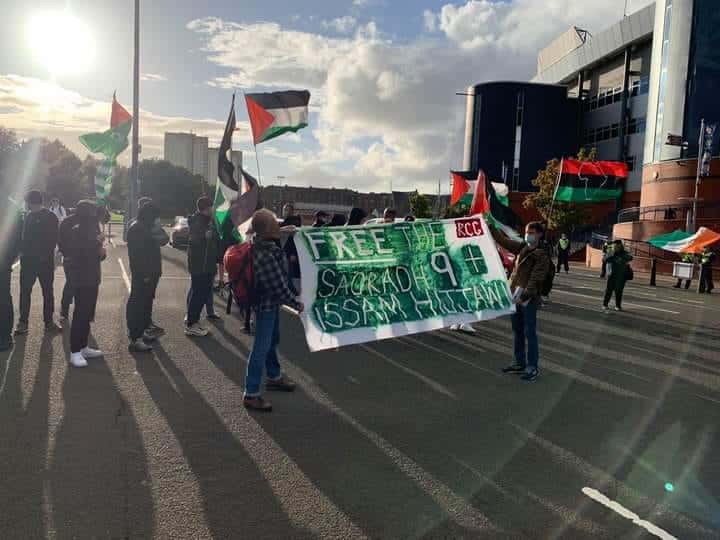 In other words, the protesters were demanding the release of the New IRA terrorists,  a group with blood on its hands, as well as the Chair of Association of Palestinian Communities in Scotland, who met with them.

Once again, these so-called “non-violent” resistance activists show their true selves; they are fine with those who murder and maim, as long as they “play” for “their team.”

And you’d think at least the Scottish media would find this newsworthy. Instead, those reading their reports about the protest may make the mistake to think the protesters are about human rights.